This week has been marked by a turning point in the Syrian uprising.

After playing the terror card, the Palestine card, the resistance card and the sectarian card, and with no sign of the Syrian uprising slowing down, this week the Assad regime has gone for broke by using gun boats to shell the city of Latakia.

It’s important to remember that this is taking place during the holy month of Ramadan.

Once you do that there’s no way back. We could be seeing the beginning of end of the last Ba’athist regime on the planet. That doesn’t mean it won’t get a whole lot bloodier.

What do you do after gunboats? Aerial bombing campaigns?

“Yet another of Syrian town under fire from the Syrian army, this time it’s the coastal town of Latakia where the district of al-Raml al-Janoubi is witnessing a military escalation which has been going on since Saturday daytime. This severely impoverished area has had to face what no other area has faced, as according to its residents it has been targeted by shelling carried out by naval units.

“For three months now tanks and military vehicles have concentrated along some of Latakia’s neighbourhoods to prevent demonstrations taking place there. However according to witness reports the latest attacks are the strongest and have come at a time where the city is witnessing thousands of demonstrators on a daily basis taking to the streets in a number of places immediately after (Ramadan) evening prayers.

“And as usual with the army’s operations, its fire doesn’t distinguish between the young and the old, not even a child in the prime of his youth.

“The widening of the demonstrations is met with a widening of the military campaigns covering a larger area, and it appears that its clear goal is to crush the popular intafada. Plus the areas which have been stormed by the army – equally both the major cities and the remote areas – were the stage for demonstrations calling for freedom and wanting to see the end of Assad rule which has extended for 41 years.

“The killing continues in the region of Jebel Az-Zawia in Idlib. Its population came out to bury its latest victims. And in front of the grave of a person who was slain there was a striking gesture with the pledging of the continuation of the protests and the preservation of their non-violent nature.

Chant: “I will preserve on the peacefulness of our revolution!”

“In Dariyya in the outskirts of Damascus the situation isn’t a lot different: funerals of those most recently killed, then news of the military forces arresting a number of the mourners.

“While the Syrian authorities are reiterating the line of ‘presumed’ armed men, pictures such as this one emerge from Der Ez-Zor of people wearing civilian clothes and carrying weapons.
However they’re accompanied by security men joining in on assaulting other (unarmed) civilians.

“Another picture from Douma shows an ambulance being used by the security forces in their operations (to suppress demonstrators).

“With the ongoing absence of a media presence making it difficult to verify what’s happening on the ground activists continue to spread pictures which refute the (Syrian) government and its media’s narrative of the army’s withdrawal from a number of cities.

“What’s certain is that since the beginning of the month of fasting the military operations and security campaigns have been witnessing an acceleration of activity simultaneously in all four corners of Syria. It appears that the regime isn’t taking notice of international criticism and it’s as if it’s in a race against time to contain an intafada which with the continuation of protest gatherings also appears not to take notice of the intensification of the suppression, and which now have become a daily occurrence.”

The regime of course denies this, desperately clinging to its story of armed gangs taking over the country.

A military source denied Monday as “absolutely baseless” media reports that Syrian gunboats have shelled the southern al-Ramel neighborhood in the Mediterranean city of Latakia.

The source was quoted by Syrian Arab News Agency (SANA) as saying Syrian gunboats are patrolling coasts to practice their routine duty in protecting coasts and preventing “weapons smuggling into the country via the Sea as it had happened in other areas.” Sana said earlier that two law-enforcement members were killed Sunday during clashes with armed men in al-Ramel neighborhood. The confrontations led also to the killing of four members of the armed groups, Sana added. Residents of al-Ramel neighborhood had made distress calls for the authorities to put an end to the gunmen practices, said Sana.

The agency said law-enforcement members were hunting down armed men, who responded with machine guns, grenades and explosive devices in al-Ramel neighborhood.

It’s now looking more and more like a case of when and not if for Assad and his regime. It can’t be long now.

So surely he should do the honourable thing and resign in protest in solidarity with the Syrian people.

Actually not that it would make much of a difference. Syrians aren’t stupid, they have long memories and they won’t forget this 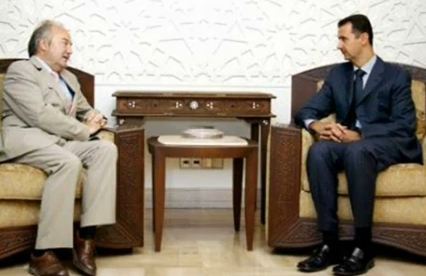