Ben White is a journalist and poet who writes things like:

I do not consider myself an anti-Semite, yet I can also understand why some are.

Here he is tweeting about the London riots:

The article he links to is written by Dr. Sofia Himmelblau. She claims:

By the symbolic cleaning, cleansing and casting out of the rioters from the community, the sweepers appear to enact the closest thing to popular fascism that we have seen on the streets of certain ‘leafy’ bits of London for years.

The idea that people cleaning up after riots, are like fascists in any way, is obviously absurd. Moreover, when you’re thinking around the subject of fascism, Ben White isn’t the best person to trust. White recommends the writing of a Holocaust denier, in his book about the Middle East.

In the article that White thinks is “brilliant”, Dr Himmelblau claims that:

The strikingly middle-class, broadly white efforts to sweep issues of inequality under the carpet of a simulated big-society photo-op has been a telling, if little discussed, aspect of the recent rioting, making little headway in the scramble of blogposts and tweets attempting hasty analyses of the unfolding turmoil.

To illustrate her point about these “broadly white”, Oswald Mosley-type fascists, Himmelblau posts this image: 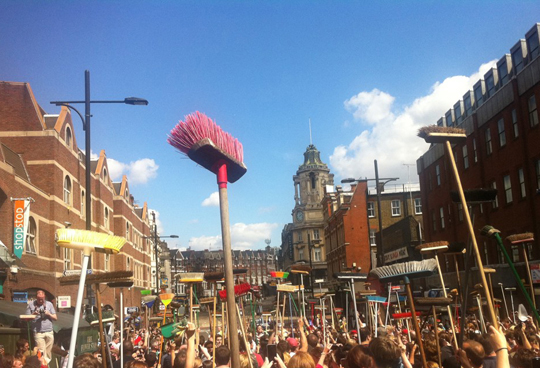 Blabber Drive has uncovered something interesting! 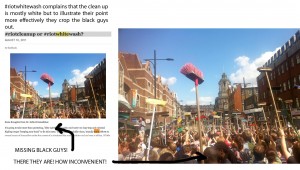 It seems that Dr. Himmelblau edited out black people from her image, so she could portray the riot clean up as “broadly white”. She thinks this point strengthens her argument about the riots being close to “popular fascism”.

This is the kind of racist trash that Ben White swallows as serious political analysis.