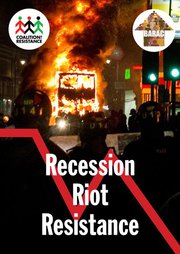 A group calling itself “Coalition of Resistance: Can’t Pay, Won’t Pay” is organising an event called “Riots, Recession, Resistance” at the University of London. From the title they appear very keen to re-brand the criminal riots blighting London and other cities around the UK as “resistance” and somehow a reaction to “recession” and thus lending these acts of thuggery, theft, arson and mindless vandalism some sort of credibility and legitimacy.

They have appropriated an image of London burning during the current unrest for their poster. They appear to be taking ownership of this unrest for the far-left.

Yes, whenever there’s some disturbance, the usual suspects – attention seekers, trots, far-left weekend revolutionaries, ‘trade unionists’ for whom ‘wages’ and ‘jobs’ are a distraction, and the whacko-wing of the Labour Party – can be relied on to rally the troops and declare the revolution is tomorrow.

We’ve already seen the former Mayor of London Ken Livingstone make an idiot of himself and self-important twitterer Jody McIntyre come a cropper, but let’s see who will be taking to the stage at UoL to bang on about “resistance” in the wake of riots that have left many innocent, ordinary people homeless and jobless; some beaten and battered, and three, in the awful incident in Birmingham, dead. Murdered.

First up, sex-pest, professional race-baiter and disgraced former Ken Livingstone staffer, Lee Jasper who, when asked if he had any sympathy for those who had lost their businesses, asked a Daily Mail reporter “When did Curry’s build a school?”. Jasper apparently added that the riots were a reaction to “economic violence” and “suspicion” of the police (who, if you need reminding, shot – not a civic leader, trade unionist or a local vicar, but – an armed gangster).

Then comes Symeon Brown, a Tottenham “youth worker” (not the one who joined in the riots I don’t think, just one excusing them). Brown tells the Harringay Independent that it’s all about “the cuts” and “suspicion” of the police after a “young man” was “killed” (who, if you need reminding, was an armed gangster). Brown says the “community” was angry. Which community is it that riots over the death of a gangster who carries an illegal firearm?

Possibly the star attraction is John McDonnell, the Labour MP always first in line to sign up to some loony far-left enterprise. McDonnell also seems to love a riot. Last year he supported the student “occupations, saying “I know the Daily Mail will report me again as inciting riots yet again. Well, maybe that is what we are doing.” This weeks riots, he quipped on Twitter, were an example of “kids” following the example of “bankers”.

At a loose end, Andrew Murray, a life-long member of the Communist Party of Britain – a group hoping the revolution is just around the corner because the ballot box isn’t giving it a show-in – will be on the platform too. Murray’s party supports North Korea. In North Korea there’s nothing to loot, and in any event, anyone who tried it (or any other sort of ‘resistance’) would most likely be liquidated along with their entire family.

Also on the bill are Viv Ahmun from ‘Black Men in the Community’, Josie Fraser, ‘mother of Demetre Fraser death in custody’ and Merlin Emmanuel of ‘Smiley Culture’. Their inclusion, I’m guessing, is to legitimise the idea that the riots really were about “Justice for Mark” (Remember him? He’s the armed gangster killed by ‘The Feds’ while trying to arrest him).

Then there’s the usual array of glittering nobodies who fill out these ‘platforms’: Clare Solomon (who has said some pretty unpleasant things about ‘the Jews’ and who was purged from the SWP – for an unrelated reason, of course), Zita Holbourne, Aaron Kiely and one James Meadway, a former SWPie and now apparently the “Chief Economist” at New Economics Foundation. I wonder what the “new economics” is – one where the hammer and switchblade replaces money, I suppose.

On that note, one supporter asks: “Any chance of a podcast or of filming it? It’s really expensive to go to London. But I’d like to see it.” Well if it’s so expensive, why not steal a car or hijack an intercity bus? Financial transaction aren’t the only means of acquiring goods and services… as I’m sure this roster of riot-apologists will explain when you get there.