There is a large Haredi community stretching from Stoke Newington up to Tottenham. Some of them have been running around on the streets during the riots. The JC reports:

Tottenham’s Chasidic residents turned out to watch the weekend’s riots on their way home from synagogue, but retreated after warnings from rabbis.

A warning was sent out to the Stamford Hill community via strictly Orthodox security service Shomrim, from Rabbi Efraim Padwa.

He said: “We have been advised by the local police to warn all members of the community not to be present in any shape or form in the areas surrounding the current riots, as being seen in the vicinity can have a negative effect. May a blessing reach to all those honouring this request.”

For those of you interested, here’s the letter from the Rabbi: 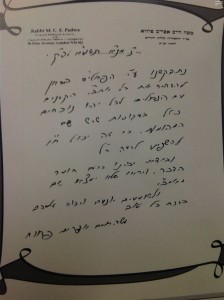 There is also some news footage which shows the haredim running around in the streets, caught up in the thrill of the moment.

Witnesses said that no -one from the Jewish community was involved in rioting but around 25 mostly young men turned out at the south end of the High Road to watch the chaos after midnight. Groups were also seen watching looting on Tottenham’s Broad Lane.

A YouTube video showed some young, strictly Orthodox men handing out challah to passing residents from a cardboard box.

There is, indeed, a video showing such an event. Why they’re doing it is not at all clear. As the sound track has been replaced with violin music by the man who uploaded it to youtube – a shisha salesman, as far as I can tell  – it is not possibly to hear what they’re saying. “Hitz2K” is of the opinion that his evidence illustrates what he calls a “tottenham riots conspiracy“.

By contrast, the Socialist Workers Party is very excited that Jews were spotted. Richard Seymour says:

This is not just a black community response to racist policing – several reports say that local Hasidic Jews have joined the protesters in force.

“When I saw Jewish people out tonight too I was happy. I thought, ‘It’s not just us’. They gave bread out to us. It isn’t just kids out tonight. It’s everyone.”

Just let’s take a step back.

Riots are exciting and scary. In the face of trouble, some people retreat to their houses. Others wander onto the streets to enjoy the atmosphere.  I awoke this morning to find a number of my friends had posted their own “eye witness” snaps of the jollity: no doubt they felt very edgy and sexy venturing out into the maelstrom.  A small number will  get involved in theft, criminal damage or violent disorder: not necessarily having planned to do so, initially.

Most will do so cluelessly, as tourists, without the benefit of a grand narrative giving meaning to the events they’re experiencing. You have to wait until the opinion pages of the broadsheets are published, for that.

Haredim, being human beings, will have reacted similarly to the great excitement of a riot on their doorstep. I doubt that any Haredim were among nicking Nikes and Playstation Pros, to be frank. But I suppose it is possible.

Isn’t it funny how fringe political groups look at current events, and – astoundingly – find their preconceptions borne out and their preoccupations reflected in them.

Incidentally, it is notable that in the Guardian’s long report on the riots – which involved people from many cultural backgrounds – the only ethnic group to be mentioned specifically are those Jews.