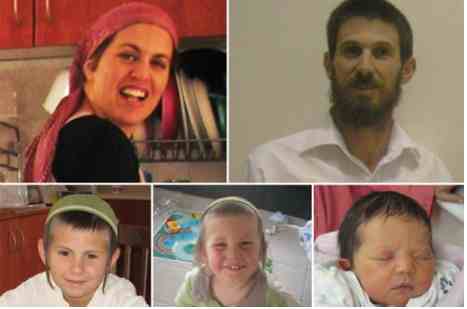 The child-murderer Hakim Awad has been convicted for the Fogel family annihilation at Itamar in March. In addition to parents Udi and Ruthie, 11 year old Yoav and four year old Elad and three month old Hadas were stabbed to death. From reports, the latter had her throat cut, almost severing her head.

In the aftermath, their grandparents gave permission for photographs of their bloodied bodies to be publicized. Readers of Harry’s Place will be aware that similar photographs of dead and critically injured Arabs routinely are broadcast, often with the sense that they are seen less as injured human beings than pornographic images to stoke hatred of Israeli policies and/or Israelis in general.

Respecting the bodies of your dead and private grief of their families is a fine virtue to hold, but one effect has been to hide the very real fear and risk of bloody violence which Israelis face on a regular basis. For that reason, in addition to the above life-affirming photo-montage of the Fogel family, I am linking to a graphic image of Udi and Hadas Fogel.

In response to Joseph W’s observations on the whitened sepulcher which is Harriet Sherwood’s office, commenter Andy Gill reminds us that, in reporting on the Fogel family, she emphasized the “hard-line” and “intensely religious” nature of Itamar.

Previously I was reflexively opposed to the existence of all Israeli Settlements as a point of principle. In witnessing the sort of hatred which can lead people to slit the throats of three month old babies, and newspaper journalists to describe the victims in overtly negative terms – even when they are below the ages of criminal responsibility in the journalists’ countries – has led me to conclude that, whatever the negotiated solution regarding all the Settlements should be, it is simply a manifesting of a pre-existing hatred.

Hakim Awad, and his brother who remains on trial, were not uniformed soldiers or engaged in any recognizable form of military actions. Even if they were, there still are rules of war to obey, and deliberately killing non-combatants – especially three children under the age of 12 – is in no way, shape or form excusable or worthy of mitigation. Nor does it matter what takes-place in other territories, any more than murdering their family or the family of a terrorist in this country would be.

And anyone who disagrees can fuck off and die roaring.