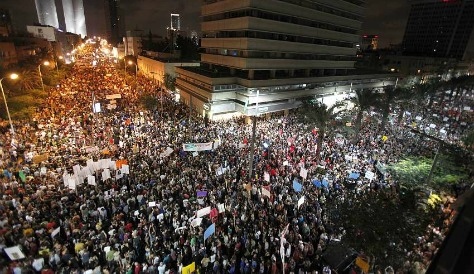 Reports are coming in of huge turnouts at demonstrations in Israel for social and economic justice– twice as many demonstrators as last week.

More than 300,000 Israelis hit the streets nationwide in one of the largest protests in the State of Israel’s history, as public anger over the skyrocketing cost of living reached unprecedented heights.

At least 250,000 people gathered in downtown Tel Aviv for a huge rally against the government, paralyzing traffic in large parts of the city. Thousands of others hoping to reach Tel Aviv by train were unable to make it after Israel Railway halted one train and cut back its service as result of overcrowded conditions.
…..
Meanwhile, at least 30,000 people gathered in Jerusalem for a major rally at the capital’s Paris Square. Protests were also held as far north as Kiryat Shomna, where thousands blocked a junction in town, and in Eilat, Israel’s southernmost city, where at least 2,000 protestors were on hand.

Three hundred thousand. We are talking here about a significant segment of the entire Israeli population.

It appears Prime Minister Netanyahu’s efforts to appease the anger of the protesters have not had the desired effect as yet. And the efforts by some on both the Right and the Left to shift the focus to West Bank settlements (which would inevitably weaken the movement) have been unsuccessful so far.

With all the focus on Zionism these days (especially from its opponents), it’s important to note that these demonstrations are Zionist in the best and most traditional sense, as envisioned by the father of modern Zionism Theodor Herzl.

Shlomo Avineri– who knows a thing or two about Zionist history and whose book on the subject is essential reading for anyone who wants to understand it– writes:

Herzl was not a socialist but he understood well that a revolutionary enterprise like Zionism could not succeed if it was to be solely based on the capitalist market model.

In his book “Altneuland,” he therefore describes the Land of Israel of the future as a social welfare society, a third way that would position itself between capitalism and socialism.

It would be a society in which natural resources – land, water, mineral wealth – are to be held by the public at large, where industry for the most part is organized through cooperatives, as is agriculture. Retail trade, however, would be in private hands. The society would provide its citizens with education and health and welfare. To staff social welfare institutions, everyone, both men and women, would be required to do two years of national service.

Herzl called this middle approach “mutualism,” and it was based on the European social and economic experience. The future Jewish society would take the principles of liberty and competition from capitalism, and the principles of equality and justice from socialism.

…The current demonstrations are not only a reflection of social protest. They are Zionist in the deeper sense of a just and humanistic Zionism.

And Labor Knesset member Shelly Yachimovich, who is now contending for the leadership of the party after former leader Ehud Barak left it in ruins, made a similar point in a 2006 interview, when Labor was part of the governing coalition– parts of which are worth rereading in light of recent events.

Elsewhere Richard Seymour of the Socialist Workers Party, who is not an expert on Israel (having never set foot there), but who plays one on his blog, offers his eagerly-sought advice to the Israeli masses:

Israeli workers have a clear choice. They can continue to invest in Zionism, continue to uphold the chauvinism at the heart of Israeli society that validates the occupation and the repression of Palestinians, and hope to resolve their dilemmas at the expense of the oppressed. Or they can make that link which they have so far refused to make, between their situation and that of the Palestinians, and begin the work of undoing the Zionism which has hitherto held them hostage.