Here’s David Hearst, a foreign leader writer for the Guardian:

If Israel ends its occupation of the West Bank, and allows it to join with Gaza, the result could be two states – a Palestinian one alongside an Israeli one. But if you accompany that with a civil rights movement inside Israel, the goal could be very different – a secular, democratic state “for all its citizens”, where Jew, Christian and Muslim are equal. A one-state solution in which Jewish citizens lose an inbuilt majority. The end of Zionism, no less.

This appears to be the outcome that Hearst hopes for. It doesn’t matter that there is no major Palestinian political movement which is seriously advocating such a “secular democratic state”. Hamas most certainly isn’t. And neither is Fatah.

The “secular democratic state” notion was the brainchild of a Marxist faction within the PLO: The Democratic Front for the Liberation of Palestine. They may have believed it back in the 1960s. Few others did.

Here’s the Palestinian draft Constitution, produced under the Chairmanship of Fatah’s Nabil Shaath:

What Fatah and Hamas both dream of is the conquest of Israel, and the creation of a single state, defined by Arab ethnic and Islamic religious identity. They’re quite open about it. See also the Hamas Covenant.

The often expressed desire, by some on the Left, for a “secular democratic state” is a product of progressive discomfort with the notion of ethnically or confessionally defined states. An ethnic or confessional politics need not result in racism or extremism; most people in most countries have a sense of national belonging, which can be fluid and open in nature. Most countries are defined, to a greater or lesser extent, by a national identity. However, those on the Left are generally uncomfortable with nationalism, at least in their “own” countries.

An example of such blood and soil imagery accompanies Hearst’s article: 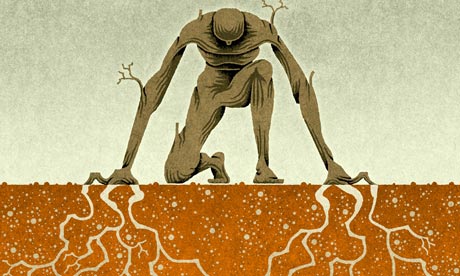 That said, the concept of states with a particular national identity is anathema to many who identify as on the Left. Accordingly, the “secular democratic state” mantra acts as a kind of fig leaf for those who oppose nationalism generally, and Jewish self-determination and the existence of Israel in particular, but are uncomfortable with the notion that Israel might simply be  absorbed into another ethnic and religious state.

Expressing support for a “secular democratic state” is, in effect, the contemporary atheist equivalent of Isaiah 11:6. Those who believe that such an outcome is imminent are akin to the ultra-religious, who live each day in the expectation of Rapture.

You won’t see many leader-writers in the Guardian calling for the recreation of a United Sudan. I don’t think I’ve seen any editorials in the Guardian suggesting that Ethiopia and Eritrea be integrated into a single state. Nobody would think of calling for the uniting of Greece and Turkey, or of Bangladesh, Pakistan and India. I expect, by contrast, that there’s a reasonable amount of support in the Guardian for Scottish independence, even if the majority of Englishmen wished to preserve the Union.

However, when it comes to Israel and Palestine, the calculus is different. I think we understand why that is.

Let there be no doubt. A two-state solution remains the only show in town. It is still achievable despite the agony of these revelations and the conflicts of the last two decades.

Some time in the next few years, that line will change. The Guardian will declare two states a thing of the past, and will declare – in sadness and anger – that Israel should no longer exist.