If you want to get some idea of how wretched life has become in the Islamic Republic of Iran, consider this:

Some Iranians used Facebook to organize a water pistol fight in a Tehran park. 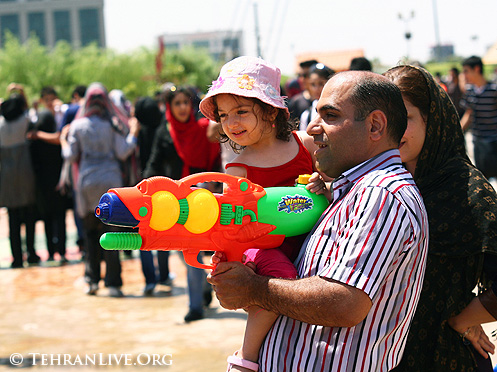 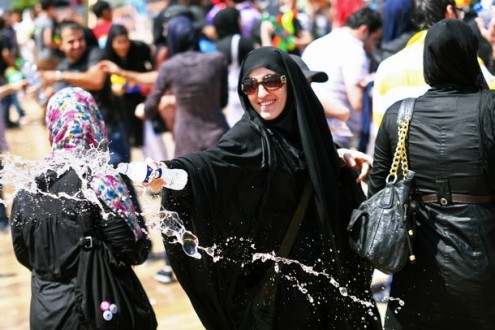 Desperate to have some fun in the Islamic Republic, lots of people took to the idea, young and old, adults and kids:

It seemed too good to be true, after all, its not even the pre-elections period, where the strict rules are slightly relaxed and a feel good factor induces people to turn up at the ballots and vote for the state approved candidates.

Behnam Atabaki, the General Director of the District, was the first official to publicly condemn the event and those who participated in it. Atabaki also criticised the Law Enforcement Forces and said they were unable to break up the “immoral” gathering which went on from 9:00 am to 12:00 noon time. Park authorities only managed to stop the massive water pistol fight, only after they thought about cutting the water supplies.

More condemnations of the “morally abnormal” event followed in the sate controlled media. Isfahan MP, Mohamad Taghi Rahbar, condemned the water pistol fight in the park and said “the officials should not show indifference to those who are endeavouring to dilute our Islamic values.” Rahbar, who is also the deputy chief of the parliament’s legal and judicial commission, added “we are pursuing more information on those who organised this and will deal with them severely. ”

Another similar event in another park on the following Sunday was simply too much to ignore for the authorities. Tehran’s chief of police, Commander Hossein Sajedinia said “Police quickly turned up and all those who took part in the event have been arrested” He added that “Police will definitely deal swiftly with those who try to break the social order.”

But it gets worse. As Potkin reports:

I got up early in the morning to write the previous post on the Islamic Republic’s lack of tolerance for a public water pistol fight in a Tehran park. By the time I got home in the evening, the state TV was parading some of the organisers and participants who were confessing to their “crime.”

The head of the Moral Police, Roozbehani : “We have asked the judiciary to deal with these wrong doers as severely as possible. We can not tolerate such public events any where in the country”