So it’s only fair to note this, from Jeffrey Goldberg:

I was reading David Wilder’s report in The Jerusalem Post about his time at the Christians United for Israel (CUFI) convention in Washington (Wilder is the spokesman for the Hebron Jewish community) and I was struck by this photo he posted, with the caption: “Left to right – Mike Isley, David Halvri, Pastor Roman Asbill, Congressman Louie Gohmert, R-Texas, myself, Jeremy Gimpel, Ari Abramowitz.” 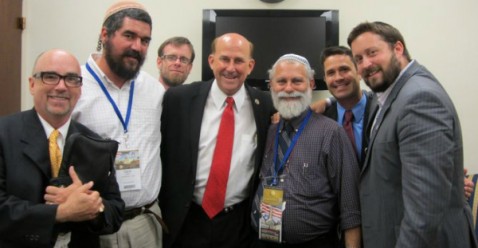 I would only note that the person Rep. Gohmert is standing next to, David Halvri, is someone I met in the 90s when he still called himself David Axelrod (no relation, as far as I can tell, to the other David Azelrod), and when he was a leader of the Kach movement, founded by the late Rabbi Meir Kahane, and of Kahane Chai, the successor organization to Kach. Kach men, of course, are fascist fundamentalists. HaIvri was arrested in Israel for celebrating the death of Yitzhak Rabin; he was also jailed for six months for desecrating a mosque. He has also been associated with groups that have been included on the State Department list of terrorist organizations. Just noting this for the record.

We’ve posted before about the remarkable Congressman Gohmert. But why, with his background, was David HaIvri allowed into the US?