Tony Lloyd MP is Chair of the Parliamentary Labour Party.

Since he’s Labour, he is unlikely to be criticised by his party for leading a delegation to Gaza to meet Hamas leaders.

The group was greeted by Ahmad Bahar of Hamas. He is a fine representative of the terrorists:

This is Islam, that was ahead of its time with regards to human rights in the treatment of prisoners, but our nation was tested by the cancerous lump, that is the Jews, in the heart of the Arab nation… Be certain that America is on its way to utter destruction, America is wallowing [in blood] today in Iraq and Afghanistan, America is defeated and Israel is defeated, and was defeated in Lebanon and Palestine… Make us victorious over the community of infidels… Allah, take the Jews and their allies, Allah, take the Americans and their allies… Allah, annihilate them completely and do not leave any one of them.

He’s a fan of the foul “Protocols” hoax too.

Bahar is used to meeting delegations to Hamas. Here he is (centre) greeting one of the Viva Palestina Hamas support missions last October. His honoured guests in the first picture include UK-based Hamas operatives Mohammed Sawalha and Zaher Birawi and Viva Palestina trustee Kevin Ovenden. Ovenden was quite chuffed, as you can see in the second picture. 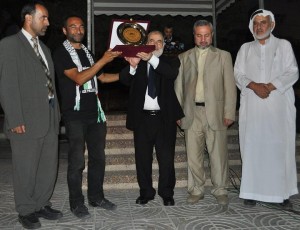 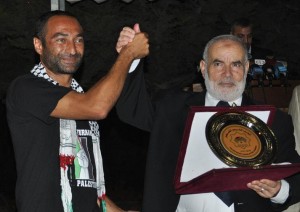 Lloyd’s delegation also met with Ismail Haniyeh. He was most grateful, according to Hamas:

Haniyeh hoped that the visit could help in breaking the siege on Gaza, stressing that the Palestinian government and the Palestinian people appreciate any effort to show solidarity with them.

Here is one of the photos from the meeting. 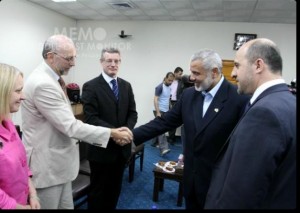 The man on the right is Arafat Madi Shukri (also spelled Shoukri). He arranged the visit. He is another operative for Hamas based in the UK. He heads the “European Campaign to End the Siege on Gaza”, a group that works closely with the Turkish charity IHH and other Hamas funders and promoters. He is also a director of the Palestinian Return Centre, a pro-Hamas political operation based in London.

Here he is shepherding another delegation to Hamas featuring Labour MPs Clare Short, Martin Linton, and Gerald Kaufman plus peers Baroness Tonge of the Liberal Democrats and Lord Ahmed of Labour. That delegation too met with Haniyeh. 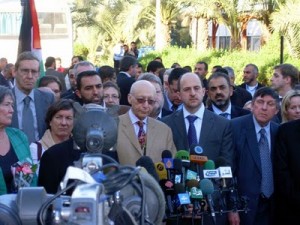 I suppose the delegates on this trip should consider themselves lucky to get so much face time with the wonderful people of Hamas. For they are quite busy. Just today they hanged two “collaborators”.

Gaza’s Hamas rulers on Tuesday hanged two Palestinians who were convicted of collaborating with Israel, an interior ministry statement said.

It was the second time this year that the Islamist movement had carried out an execution of someone accused of ‘collaborating’ with the Israelis.

Tony Lloyd has called the death penalty “a totally misguided form of punishment”.

I think it is Mr Lloyd and his fellows who are “misguided”, to say the least.