The self-styled anti-racists of “Unite Against Fascism” have published an interview with Dilowar Khan, a director of the East London Mosque. Khan engages in straightforward slander:

The EDL, inspired by the documentaries and writings of journalists such as Andrew Gilligan, Martin Bright and others, claimed that Muslims were attempting to turn Tower Hamlets into an Islamic state, which is absolute nonsense.

Both journalists have exposed Islamist extremism in a number of pieces. This is why Khan smears them with the EDL tag. He would prefer silence, since his mosque is very much part of the problem. His words are reprehensible.

Next come the lies. Last year a highly controversial Islamist conference was due to be held at the Troxy, a venue in East London. This is Khan’s version of events:

In June 2010 they [the EDL] singled out an Islamic conference and mounted a campaign calling for it to be banned for having so-called “radical” speakers.

This wasn’t true, a fact that both the police and the local council confirmed. Despite this, the conference had to be cancelled and this infuriated many young people in particular. They now felt as though everyone was against them

This what the council actually said:

The Troxy must comply with the law and have regard to the impact such an event will have on social cohesion in the East End, the council warned today.

Deputy Leader Josh Peck said: “This Islamic conference is not supported by the council and we call on the Troxy to call it off in the interests of public safety and social cohesion.

“If necessary, we will review our working relationship with the Troxy.”

Council Leader Helal Abbas has been holding talks with police urging them to find any way to make sure both the conference and the EDL demo don’t take place.

“Neither is representative and will cause great distress,” said Cllr Abbas.

This was the response of the venue owners:

The Commercial Road venue was set to host ‘The Book that Shook the World’ but has changed its position after signing a council pledge.

A spokesman for the Troxy said: “We recently signed up to the council’s No Place for Hate campaign and feel that some of the speakers have the potential to clash with the terms of the pledge.”

What’s worse is Khan’s whitewashing of “so-called “radical” speakers”. The planned Troxy conference would have been one of the nastiest Islamist meetings ever to disgrace East London. Since homophobia is a key issue of late, and the mosque insists it opposes it, consider the views of three of the scheduled speakers at the Troxy event:

In Islamic law the punishment for homosexuality is no different from the punishment for adultery and fornication. It could be death. It’s looked at as a deviation, just as if somebody is involved in bestiality, sexual relations with animals. Death! This is a deviation. Adultery is death. So it’s not any special punishment, it is a punishment for deviant behaviour which threatens the family structure of a society.

Bilal Philips has been banned from the UK.

Now what is the punishment [for homosexuality]? According to the Bible, excuse me, this is a Christian country. Read the history of this country. Christian country. According to the Bible, the Bible says the person should be thrown down from a mountain and then stoned on top of that. That’s what Isa [Jesus] told you people. But they teach “no, you’re homophobic”. And those Christians who stand up against this abominable action, which goes against humanity, then they’re fundamentalists like us as well then.
…
I’m not homophobic. I believe in a natural way of life. I’m repeating you what your Bible tells you. In the hadith you find: “You find the people doing the action of Lot, kill the one who does the action and the one the action is being done to.”

Do you practice homosexuality with men? Take that homosexual man and throw him off the mountain.
…
They have given them [homosexuals] unprecedented rights, so that your child can be exposed and introduced to lesbians. Now they say “if you discriminate against that, you’re going to jail”. We’ll discriminate, but we’ll discriminate in a way where we don’t get in trouble. The Muslim is a dentist, one of those people come, you want to take a big, big needle and stick it in his gums.
…
If I was to turn around and I was to call homosexuals perverted, dirty filthy dogs that should be murdered, that’s my freedom of speech isn’t it?

Not “radical”? Excuse me?

Khan goes on to praise a demonstration against the EDL in Tower Hamlets:

The following week we had our counter-demonstration, even though we knew that the EDL had decided against coming to Tower Hamlets. Around 5,000 people came together for a massive show of unity. Everyone was there. The march was young and old, Bengali, Somali, African-Caribbean and English together with people of all faiths and none. 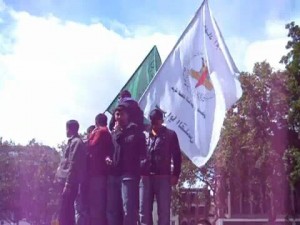 Later in the day the violence began:

Gangs of youths have attacked police officers after an anti-racist march, Scotland Yard has said.

Cordons were set up to stop people going up Whitechapel Road, in east London, because officers feared random attacks on members of the public.

The scenes followed a rally, organised by Unite Against Fascism, that attracted several thousand people.
…
“Police officers were attacked by the crowd at points throughout the afternoon. One member of the public was attacked at random by members of the crowd as those gathered surged up and down the Whitechapel Road.

“In order to prevent injuries to the public and officers, and serious disorder, police withdrew from the immediate area and a series of filter cordons were put in place. The cordons were used to prevent access to parts of Whitechapel Road due to concerted efforts by the crowd to attack people at random.”

The cordon was in place for two hours. One person was arrested for assault.

A spokesman for Unite Against Fascism said around 5,000 took part in the march from Stepney to Whitechapel. He said: “I heard there were a few nasty scuffles between local youths and police but certainly the demo was very positive and a really good vibe.”

Dilowar Khan’s mosque is not good for London. It is instead one of the capital’s serious problems.

But none of the mountains of evidence will shift the opinions of the idiot left, which continues to champion the mosque and will hold another “anti-fascist” rally at the mosque’s London Muslim Centre this Friday.