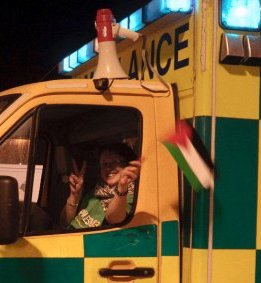 Merton has taken part in the Viva Palestina convoy, and you might have seen her around Redbridge alongside the formidably named Naomi Wimborne-Idrissi, trying to get local supermarkets like Tesco, Sainsbury’s and Waitrose to boycott Israeli goods.

She was a spokesperson for the ‘Road to Hope’ convoy, a project run by conspiracy oddball and fan of Hamas Ken O’Keefe.

Here another convoy member declares that the Libyan police are their friends. The convoy also singled out the Libyan government for “special praise”. There is a pattern to this, as Viva Palestina have also demonstrated in Libya. Viva Palestina’s first convoy was fully supported by Gaddafi’s regime, and George Galloway and his sidekick Kevin Ovenden were most grateful for the brutal dictator’s assistance.

Via her Facebook profile, Ellie has given the world the benefit of her views on the terror attacks in Norway:

But why, you may ask, would the Israelis be behind such skulduggery? Ellie has further analysis: 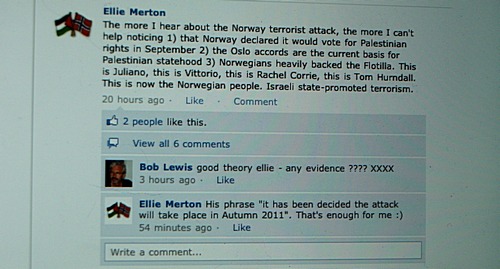 “The more I hear about the Norway terrorist attack, the more I can’t help noticing 1) that Norway declared it would vote for Palestinian rights in September 2) the Oslo accords are the current basis for Palestinian statehood 3) Norwegians heavily backed the Flotilla. This is Juliano. This is Vittorio. This is Rachel Corrie. This is Tom Hurndall. This is the Norwegian people. Israeli State-promoted terrorism.”

When challenged still further, she explains: 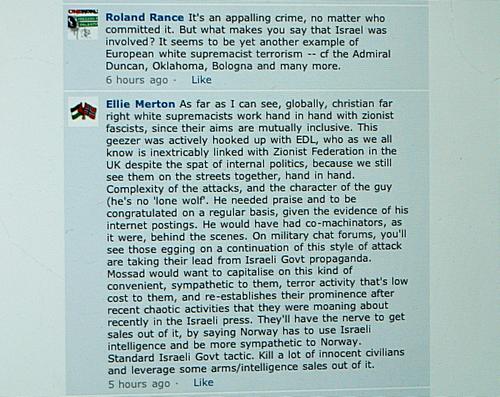 “As far as I can see, globally, christian far right white supremacists work hand in hand with zionist fascists, since their aims are mutually inclusive. This geezer was actively hooked up with EDL, who as we all know is inextricably linked with Zionist Federation in the UK despite the spat of internal politics, because we still see them on the streets together, hand in hand.

“On military chat fourms, you’ll see those egging on a continuation of this style of attack are taking their lead from Israeli Govt propaganda…They’ll have the nerve to get sales out of it, by saying Norway has to use Israeli intelligence and be more sympatheitc to Norway (sic). Standard Israeli Govt tactic. Kill a lot of innocent civilians and leverage some arms/intelligence sales out of it.”

Ellie describes herself as

“On and off for the last 20 years I’ve been muddled up in Palestinian civil rights and justice”.

Who is the patron of Waltham Forest PSC, and sometimes a speaker at their events?