This is Anders Behring Breivik: 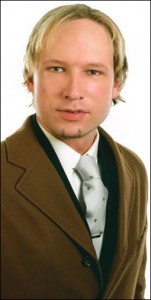 He promotes a very conservative opinions, which he also called nationalist. He expresses himself strongly opposed to multiculturalism – that cultural differences can live together in a community. Breivik has had many posts on the site Document.no, an Islam-critical site that publishes news and commentary. In one of the posts he states that the policy in day no longer revolves around socialism against capitalism, but that the fight is between nationalism and internationalism. He expressed clear support for the nationalist mindset. Anders Behring Breivik has also commented on the Swedish news articles, where he makes it clear that he believes the media have failed by not being “NOK” Islam-critical.

I have used Google Translate throughout this piece. Google Translate is not very clear sometimes, and it is tempting to tidy it up, but this is so serious that I don’t want to tamper with the original articles in any way, as I don’t understand Norwegian.

Verdens Gang is Norway’s second highest selling paper, and is worth taking seriously. If this report is correct, then Behring was leaving comments on the Document.no site.

We read of an “Anders Behring” talking about the UK Labour party, arguing they are seeking to annihilate Europeans via multicultural policies, and imagining a future Nuremberg trial for them:

The shapes Labour adviser said the Government opened up the UK borders Mostly two humiliate Right-wing opponents of immigration. This proves therefore that some of the motivation for mass immigration is not based on humanism (cloak) but more due. direct hatred of people with conservative values ​​as us, the cultural conservatives. A large part of them hate all European and want to destroy it through multiculturalism. Multiculturalism is an anti-European hate ideology designed to destroy a European culture / traditions, identity, Christianity and the Nations sovereignty. The goal is a utopian Marxistist superstate. To accomplish this, the first all European annihilated. […] Has anyone tried to make an estimate of our opponent’s intentions? This will be relevant to a possible future Nurnbergprosess. It is of course difficult to prove this, because almost everyone uses kulturmarxister humanistic tire alibis.

At this point, I want to make something clear – I am simply trying to portray and understand Behring’s political outlook, not to enter into a debate about multiculturalism, the Labour party, Left vs Right issues  – that is for another day. Today is not about scoring political points.

In any case, Behring is not a sensible opponent of mass immigration or multiculturalism. He thinks their proponents are like Hitler.

He commented on Document about what he calls a ‘genocide’ of white South Africans:

The following blog documents the number of white South Africans who have been killed in what begins to resemble a systematic racism motivated genocide. […]

The blog he recommends, is a white supremacist site heavily supportive of the BNP.

“Anders Behring” has also left odd comments another blog, Minervanett. In January 2010, he also leaves a link to another neo-Nazi site, VDare:

I agree, see also:http://www.vdare.com/gabb/100127_police_state.htm that you see as the problems were there before the Muslims were many, but this is clearly ground the problems better, of course. Viewing else that you do not mention the BNP, this is well the party that most clearly målbærer the problem with the radical / totalitarian Islam?

He thinks the BNP are the only ones who are dealing with Islam properly. Later on in the discussion, he writes about his past as a youth activist, replying to another friend on the forum:

Could not agree more, PeeWee. It is now 11 years since we discussed last time, hehe good times on FpUs forum: D And I’m obviously not any more laissez-faire supporter when it belonged to my radical younger years

Notice the mention of “FpU”. This is a reference to Norway’s Progress Party Youth. If true, then Behring was discussing politics on their internet forums in 1999, when he would have only been 20 or 21 years old.

He is alleged to have murdered youths aged 14-20, of the AUF. The AUF is the youth wing of the Labour party, a left-wing rival to the centre-right Progress party.

Other internet users – who seem to know “PeeWee” quite well – have since identified “Anders Behring” with the FpU forums.

Here is another claim he makes:

I’m NOK much later in the game than him when I have only been politically active for 13 years. I førstegenerasjonsdhimmi (Generation Y). I was active [in the] Oslo FrP / FpU in the first 6-7 years (in the cultural conservatives + laissez faire capitalist / liberal camp) and contributed to the Progress Party’s success before I stopped. I felt the time was more important to help develop / promote the political doctrines abroad especially British, German, French, American). I ran the business a few years while I studied and earned a few million so I could finance a inntektsløs politically active life. I now use these funds to be able to work full time to further develop / promote the Vienna school of thought that Fjordman, Bat Yeor, Spencer + many others have already contributed so much till. The last three years I worked full time with a cultural conservative works that will help to further develop / promote these political doctrines further. Anyway, I consider the future consolidation of the cultural conservative forces on all seven fronts as the most important in Norway and in all Western European countries. It is essential that we work to ensure that all these 7 fronts using the Vienna school of thought, or at least parts of the grunlag for 20-70 year-struggle that lies in front of us.

Very, very odd stuff. He seems to be all-over-the-place, politically.

If, indeed, this “Anders Behring” really is Anders Behring Breivik (he appears to be so, given the reports in the Norwegian press that I have referred to already), then he used to be active within a centre-right political party as a youth.

And if he is the proven to be perpetrator of these horrific crimes, then he has murdered other young people, attached to a centre-left political party.

The banality of this would be shocking in itself, yet we are already so horrified by the nature of the alleged crimes.

What comes across very strongly from Behring’s online profile, is a sympathy for neo-fascist outfits like the BNP, and a strong dislike of Muslims and left-wingers.

Here is a powerful image from yesterday in Oslo: 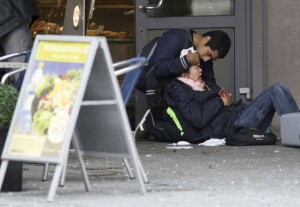