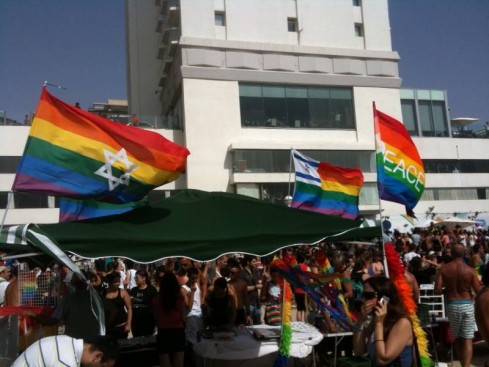 Jeffrey Goldberg wonders if Michele Bachmann and other Christian-right supporters of Israel understand the country in all its complex reality, and not just as an object of Biblical prophecy.

Bachmann is unwaveringly opposed to what she refers to as the gay “lifestyle.” Her husband, Marcus, runs a counseling practice devoted in part to the straightening-out of gay people. Bachmann herself told an audience not long ago, “It’s a very sad life. It’s part of Satan, I think, to say this is gay. It’s anything but gay.”

So a gay-pride parade in New York or San Francisco might induce in Bachmann some uncomplicated feelings, such as revulsion and loathing. But Tel Aviv is a different story. Because Tel Aviv is in Israel — a country that, in Bachmann’s view, was placed on earth by God to fulfill his ultimate purpose.

Bachmann has built her foreign-policy platform on the nuance-free defense of Israel. She does this not because Israel is a strategic ally, or because it’s a democracy, but because the Bible states that God will curse those who betray it.
…..
Just imagine, then, Bachmann’s paralysis when confronted by the reality of Tel Aviv, which is home to the largest annual gay-pride parade in the Middle East. The most recent one, held last month, drew about 100,000 people. According to a Guardian reporter, “Every square metre of shade was crammed” and “friends greeted one another with sweaty kisses and hugs.” A man named Amit Margalit, described as a bare-chested 28-year-old, said, “The weather is hot, the guys are hot, it’s a hot city.”

And it’s a city apparently in thrall to Satan. How could Israel, a country that represents to the Christian right proof that history is steered by God’s hand, allow such a thing to happen? This dilemma might be too much for Bachmann to bear.

Of course, Bachmann would not be surprised by Israeli society’s laissez-faire attitude toward gay rights if she knew very much about Israel. But she doesn’t seem to know much at all, apart from what she reads in the Bible.

Replying to those who say Israel doesn’t have the luxury of disdaining any of its self-proclaimed friends, Goldberg writes:

I’m not making light of sincerely held beliefs. There is, of course, something improbable and mysterious and even miraculous about the rebirth of the Jewish state after 2,000 years of nonexistence. And Israel doesn’t suffer from a surfeit of friends in the world. But there are hazards in this sort of love, both for the U.S. and for Israel.

Finally Goldberg detects something disturbing in the attitude toward the Jews among some of Israel’s Christian-right supporters:

How will the Christian right feel if Israel does, in fact, make compromises for the sake of peace by “betraying” its biblical birthright? Some pro-Israel evangelical leaders already blame Jewish stiff-neckedness for the phenomenon of anti-Semitism.

In his book “Jerusalem Countdown,” Hagee writes: “It was the disobedience and rebellion of the Jews, God’s chosen people, to their covenantal responsibility to serve only the one true God, Jehovah, that gave rise to the opposition and persecution that they experienced beginning in Canaan and continuing to this very day.” The Jews’ own rebellion, he writes, “had birthed the seed of anti- Semitism.”

I’ve met evangelical leaders who share an unpleasant tic with Israel’s critics on the far left: They all hold Israel to an impossible standard of moral and political behavior. To much of the Christian right, Israel isn’t a real nation-state facing a series of painful choices. It is, instead, a biblical fantasyland, and an instrument of Christian salvation. In Bachmann’s case, it’s a living test of America’s fealty to God.

It was similarly disturbing to see how quickly another of Israel’s Christian-right supporters, former Arkansas governor Mike Huckabee, posted a statement on his website warning Israel and the Jews “not to insult” the friends they have after the Anti-Defamation League criticized Huckabee for making what it considered an inappropriate Holocaust analogy.

Although Huckabee later removed the statement from his website and made nice with the ADL, his suggestion that Christian support for Israel is somehow conditional on the respectful behavior of Jews ought to leave a bad taste in the mouths of Israel’s friends.