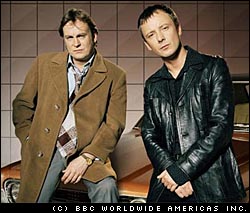 Finally, the Evening Standard has begun concentrating on the Met chief Sir Paul Stephenson’s odd relationship with the News of the World.

Last week, Harry’s Place looked into the private dinners between Stephenson, his media advisor Dick Fedorcio, and NotW’s deputy editor Neil Wallis. We noted that Stephenson had claimed that only a handful of police officers were only paid small sums of money.

Now the Evening Standard reports that Neil Wallis was working for Stephenson as a PR advisor:

The Scotland Yard chief is facing “urgent questions” from Prime Minister David Cameron and Mayor Boris Johnson after paying Mr Wallis £1,000 a day – a total of £24,000.

The Standard has learned that Mr Wallis’s company, Chamy Media, was struck off the companies register two months ago for failing to file any documents since it was set up in 2009.

I wonder who decided to appoint Wallis as Stephenson’s advisor?

Oh. That explains a lot.

Downing Street sources said Mr Cameron believes Sir Paul has “urgent questions to answer” and is angry the Met chief failed to inform him about Mr Wallis’s employment when they met for crisis talks at No 10 earlier this week.

“Why did it come to light only on the day of the arrest?” demanded one Government official.

In a letter to Lord Justice Leveson, the judge heading the public inquiry into phone-hacking, the Mayor warned that “serious questions have been raised about the relations between the press and the police”.

He had been “made aware” of the contract with Chamy, and asked Lord Justice Leveson to consider “whether there is any culture, in this country, of financial collusion between the press and police”.

Mr Wallis, nicknamed the Wolfman in Fleet Street, registered Chamy Media in September 2009 and ran the business from his £850,000 house with his wife Gaye, 56, as co-director.

One month after its incorporation, Chamy Media won a contract to supply personal communications advice to Sir Paul. The deal ended in September last year. However, Companies House struck off the firm in May “for failing to maintain its records, file accounts and reveal its directors and shareholders, which is in breach of the 2006 Companies Act”.

Former mayor Ken Livingstone said Sir Paul was guilty of “an appalling lack of judgment. I find it breathtaking that the Met could employ someone who held such a senior position when the News of the World was allegedly involved in criminal activity.”

Former Scotland Yard DCI Peter Kirkham said: “The Met should have undertaken a thorough vetting process when engaging with somebody of that background in such a sensitive area. We don’t yet know whether that happened.”

Keith Vaz, chairman of the Commons home affairs select committee, which will question Sir Paul next week, said the revelation about Mr Wallis’s employment had stunned MPs. “There seem to have been a lot of connections between the Metropolitan Police and an organisation they were investigating.”

Downing Street is reserving final judgment on whether Sir Paul might be suspended until after he provides explanations to the home affairs select committee, which has called him to answer questions urgently on Tuesday at noon, and also to Home Office officials who are compiling a report for Home Secretary Theresa May.

The Evening Standard also reports that Boris Johnson is furious with Stephenson:

The Met chief arrived at City Hall “ashen-faced” after being summoned by Mayor Boris Johnsonto explain himself over the revelations that Neil Wallis had been employed as an adviser to Scotland Yard.

Details emerged today of the 90-minute meeting in Mr Johnson’s office, during which the Metropolitan Police Commissioner tried to justify his actions.

As Sir Paul entered City Hall he was heard by sources to say: “I came as soon as I could.”

In the meeting, the Mayor was said to have used “robust” language and “very plain English”. Sources claimed he demanded that Sir Paul tell him if he knew of any more damaging claims that could emerge about the Met.

A source close to the Mayor said: “Boris is disappointed that Sir Paul did not lay his cards on the table when they met to discuss phone hacking in recent weeks and tell him, ‘By the way there is something you ought to know about this guy who was working for us’.

“Boris felt personally let down about discovering this so late in the day. As soon as he heard he immediately said, ‘Get Paul in here now’. He was extremely cross and very concerned to find out about this peculiar arrangement.”

Also at the meeting were deputy mayor Kit Malthouse, chairman of the Metropolitan Police Authority, and the Commissioner’s press secretary. The source added: “Sir Paul spent one and a half hours in City Hall justifying and explaining what went on. As well as calling in Sir Paul, Boris rang Theresa May and David Cameron – that shows how seriously this is being taken.”

Ian Blair resigned as Met chief following the Jean Charles de Menezes shooting – surely Paul Stephenson will have to resign as Met chief, given the extent of his ties with criminals who likely hacked into Menezes’ phone, and the phones of other crime victims under the Met police’s jurisdiction.

He has turned the Met police into a laughing stock: