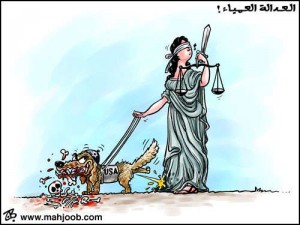 Here is a cartoon, depicting a Jewish dog (no – not plausibly an Israeli one: as the colour blue and the two stripes are missing) wearing a yarmulke and a USA shirt, savaging a skeleton while urinating on Justice.

It was posted on the blog of  the UN Human Rights Council’s expert on Palestine, Richard Falk.

“It is a complete lie. I know nothing about such a cartoon, and would never publish such a thing, ever.”

and then deleted the cartoon.

“Maybe I do not understand the cartoon, and if it offends in this way I have removed it from the blog. It may be in bad taste to an extent I had not earlier appreciated, but I certainly didn’t realize that it could be viewed as anti-semitic, and still do not realize.”

Falk has now posted a further ‘clarification‘ in which he repeatedly explains that he did not appreciate that the cartoon was antisemitic, and then goes on to apologise to animals:

To be clear, I oppose any denigration of a people based on ethnicity, race, religion, stage of development, and believe in the human dignity of all people in their individual and collective identity.Beyond this, if we are to have a sustainable human future we must also make peace with nature, and treat animals with as much respect as possible. This is both a sacred imperative of my idea of a spiritual life, but also an integral aspect of species survival on an increasingly crowded, overheated, and endangered planet.