Remember when Hugo Chavez stood before the General Assembly of the United Nations in 2006 and plugged Noam Chomsky’s book “Hegemony or Survival,” turning it into an instant best-seller? 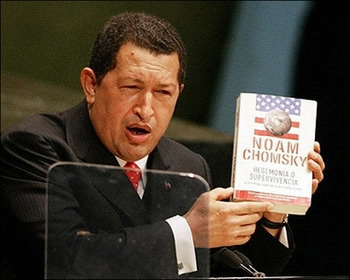 In 2009 Chavez welcomed Chomsky when he visited Venezuela. 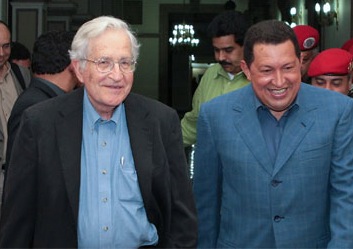 But now, reports Rory Carroll of The Observer:

…Chomsky has accused the socialist leader of amassing too much power and of making an “assault” on Venezuela’s democracy.

“Concentration of executive power, unless it’s very temporary and for specific circumstances, such as fighting world war two, is an assault on democracy. You can debate whether [Venezuela’s] circumstances require it: internal circumstances and the external threat of attack, that’s a legitimate debate. But my own judgment in that debate is that it does not.”

Chomsky, a linguistics professor at Massachusetts Institute of Technology, spoke on the eve of publishing an open letter that accuses Venezuela’s authorities of “cruelty” in the case of a jailed judge.

The self-described libertarian socialist says the plight of María Lourdes Afiuni is a “glaring exception” in a time of worldwide cries for freedom. He urges Chávez to release her in “a gesture of clemency” for the sake of justice and human rights.

Chomsky reveals he has lobbied Venezuela’s government behind the scenes since late last year after being approached by the Carr centre for human rights policy at Harvard University. Afiuni earned Chávez’s ire in December 2009 by freeing Eligio Cedeño, a prominent banker facing corruption charges. Cedeño promptly fled the country.

In a televised broadcast the president, who had taken a close interest in the case, called the judge a criminal and demanded she be jailed for 30 years. “That judge has to pay for what she has done.”

Afiuni, 47, a single mother with cancer, spent just over a year in jail, where she was assaulted by other prisoners. In January, authorities softened her confinement to house arrest pending trial for corruption, which she denies.
…..
Speaking from his home in Boston, Chomsky said Chávez, who has been in power for 12 years, appeared to have intimidated the judicial system. “I’m sceptical that [Afiuni] could receive a fair trial. It’s striking that, as far as I understand, other judges have not come out in support of her … that suggests an atmosphere of intimidation.”

He also faulted Chávez for adopting enabling powers to circumvent the national assembly. “Anywhere in Latin America there is a potential threat of the pathology of caudillismo [authoritarianism] and it has to be guarded against. Whether it’s over too far in that direction in Venezuela I’m not sure, but I think perhaps it is. A trend has developed towards the centralisation of power in the executive which I don’t think is a healthy development.”
…..
[Chomsky] remains fiercely critical of the US, which he said had tortured Bradley Manning, alleged source of the diplomatic cables exposed by WikiLeaks, and continued to wage a “vicious, unremitting” campaign against Venezuela.

The Chávez government deserved credit for sharply reducing poverty and for its policies of promoting self-governing communities and Latin American unity, Chomsky said. “It’s hard to judge how successful they are, but if they are successful they would be seeds of a better world.”

Pretty mild stuff, although I suppose we should be grateful that Chomsky has finally realized (years after others on the Left) that there is something fundamentally wrong with the way Chavez has been running Venezuela. And it’s possible to dispute whether Chavez’s policies have had any meaningful impact on poverty (unlike Lula’s in Brazil), promoted self-government or achieved Latin American unity.

And the treatment of Judge Afiuni is hardly the only abuse of human rights and democratic process committed by the Chavez regime.

Update: After Chomsky claims that Rory Carroll’s article was “dishonest” and “deceptive,” The Guardian publishes a transcript of the interview with him.