Middle East Monitor has a running tally of headbangers who they’ve persuaded to sign up in support of the hate preacher, Raed Salah.

It goes without saying that they’ve added the signature of the convict, Lord Ahmed, the Labour Peer who is an adviser to Middle East Monitor, and who originally booked a room in Parliament for Salah.

They’ve also managed to persuade Lord Hylton, a crossbench peer who is involved with Faith Matters, and has a history of “engagement” with Islamist political groups, including MEMO. 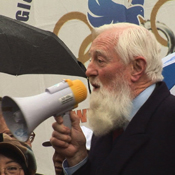 For those interested in pageantry and flummery, here’s a history of his title from Wikipedia:

Baron Hylton is a title that has been created twice, once in the Peerage of England and once in the Peerage of the United Kingdom. The first creation came in the Peerage of England 1295 when Robert Hylton was summoned to the Model Parliament as Lord Hylton by writ. His son, Alexander, was called to Parliament in 1332 and 1335, but no further summons were sent for his descendants. Therefore, the title has only been held de jure after the death of the second baron.[1] Indeed, the last baron was Member of Parliament for Carlisle after “inheriting” the title, due to this anomaly. Despite this, the creation is deemed to have fallen into abeyance on the death of the eighteenth baron with male heirs in 1746.
The second creation came in the Peerage of the United Kingdom in 1866 when the soldier and Conservative politician, Sir William Jolliffe, 1st Baronet, was made Baron Hylton of Hylton in the County Palatine of Durham and of Petersfield in the County of Southampton. He had already been created a Baronet, of Merstham in the County of Surrey, in 1821. He was the grandson of William Jolliffe (for many years Member of Parliament for Petersfield), and a co-heir of the original barony of Hylton through his grandmother Eleanor (the wife of William Jolliffe), daughter of Anne Hylton, sister of the eighteenth Baron of the 1295 creation.

For those interested in Lord Hylton’s politics, you’d be unsurprised to know that he routinely votes “very strongly against equal gay rights”

I expect that’s why he is so keen on Raed Salah:

It is a crime. A great crime. Such phenomena signal the start of the collapse of every society. Those who believe in Allah know that behavior of that kind brings his wrath and is liable to cause the worst things to happen.

I wonder who else will join MEMO’s merry band of idiots and bigots?

The coalition keeps getting stronger. Notable additions include:

So it is very useful to have this list of supporters. We’ll be referring to it for years to come.