When Middle East Monitor brought Raed Salah to Britain, he was presented as some sort of champion of the “Arab Spring”. 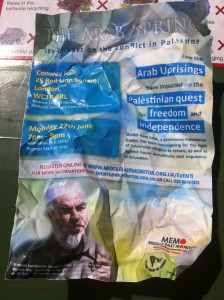 That’s funny. He and his movement are ideologically aligned with Hamas. He has also funded Hamas. It is of course backed by the tyrannical regime in Damascus and represses Palestinians brutally in Gaza.

And whom did Salah visit just last year? 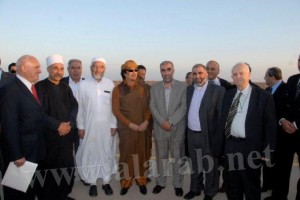 He was a member of a Palestinian delegation that also included Haneen Zoabi, the author of this execrable article on the Salah affair in the Guardian. Here she is. 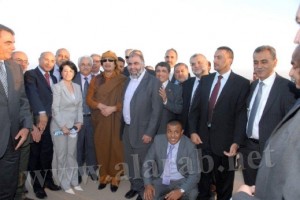 You can see more pictures of the delegation here.

This is how it went:

Another member of the delegation, Wadi Awadi, a newspaper editor, says that the delegation was under tight security inspection of the local forces throughout the visit. “The whole meeting with Gaddafi was bizarre. It was very brief, and indeed we were prevented from meeting the people, despite our requests. They didn’t provide any explanations for this.

“We had to sneak into the city of Tripoli to see the real state of affairs with our own eyes and discovered the secret service had been following us. At first we thought it was for security reasons but we later found out they made a point of not letting us be exposed to the people’s real social distress.”

How surprising! Whodathunkit? Not some members of the delegation, apparently:

Awadi criticizes some of his colleagues saying “some of the Arab public figures were being obsequious and treated Gaddafi as the greatest and best leader. I think they should apologize to the Libyan people as they visited their country without meeting the locals and maybe created the impression that Israeli Arabs support Gaddafi’s rule.

Awadi is far from alone there:

Ahmed Tibi, a prominent Arab lawmaker, called Gadhafi “the leader of the Arab leaders, king of the Arab kings,” according to an official transcript published on a Libyan government news website.

Tibi told The Associated Press his comments were taken out of context and the majority of his speech was devoted to criticizing the lack of educational and social progress in the Arab world — positions that have won praise in the mainstream Israeli media. Still, he didn’t take Gadhafi to task. Tibi sent a copy of his speech to the AP.

As Gadhafi’s forces continue a crackdown that has reportedly included firing on protesters and launching airstrikes on rebel positions, such revelations have sparked soul-searching in the Arab community. Some constituents accuse their leaders of hypocrisy that is harming their cause.

“If you hug dictators who oppress and kill their people — what’s your moral position then?” asked poet Salman Masalha, who criticized the visits in a series of editorials.
…
Minders prohibited them from leaving their hotels, telling them the visit — organized by Libya’s ambassador to Jordan — was just to meet Gadhafi. They were instructed to call him “the brother, the leader.”

They were flown out to the Libyan desert, then bused to a giant tent where they met Gadhafi. After fawning speeches by some delegation members — including radical Muslim leader Sheik Raed Salah — Gadhafi rambled for 40 minutes, Zedian said.

Here is Salah beaming with the Libyan ambassador to Jordan before the trip. You can see pictures of his fellows here. 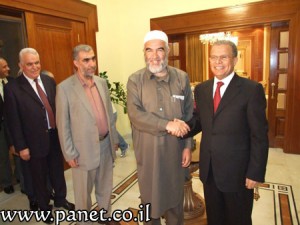 Gaddafi was on form as the delegation was brought in to pay homage to the brother, the leader:

Gaddafi stressed that as long as the Israelis are acquiring the animosity of the Arab nation whom they live within, they will inevitably come to their end. They will not be protected by the US or Europe all the time who do hate them and have already expelled them and encouraged them to go to Palestine to meet their end there.

“They encouraged them to go to the Promised Land where they will meet their promised death,” Gaddafi said as quoted by the Libyan news agency JANA.

Raed Salah is no “Arab Spring” hero. He is just a horrible extremist who will work with tyrants too in order to advance his cause.

No wonder the Hamas UK network wants to hear from him.