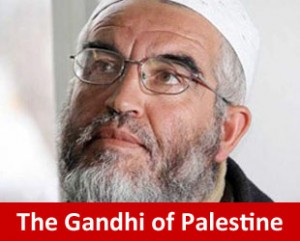 Bad news for the hate preacher and Bin Laden mourner who Middle East Monitor calls “The Gandhi of Palestine”:

The head of the northern branch of the Islamic Movement in Israel, Sheikh Ra’ad Salah, was arrested in London on Tuesday evening. The sheikh spent the night in a prison cell, and is expected to be deported from the U.K.

Zahi Nujeidat, spokesperson for the northern branch of the movement, told Haaretz Wednesday morning that Salah was arrested at the hotel where he was staying after a speaking engagement in the U.K. city of Leicester.

Salah did indeed speak at Leicester last night. You will remember Dr Samuel Lebens’ article on life, for Jews, in that city:

In the past few years, I have found it is almost impossible to walk down its main streets without having anti-Semitic abuse hurled at me and my family. Cars slow down, with windows opened, in order to unleash a bloodcurdling howl of Jew-hatred. I don’t feel comfortable to dress, outwardly, as a Jew in that city.

It is a place to which I fear to bring my children; I don’t want them to know the face of anti-Semitism.

A young relative of the Rabbi, in that city, had a pellet gun shot at him indiscriminately. The synagogue there has been the target of repeated acts of vandalism. Recently, anti-Semites located the home of its only Orthodox Rabbi. They hurled bricks through its door in the middle of the night. The fear that such an attack can strike into the hearts of a young family is barely describable.

When will the next brick come? Will it still be a brick, or will it, God forbid, be something worse? How are they supposed to explain the attacks to their children? It is the sort of fear that can drive a family, and even a community, out of a city.

The city I’m now describing is also Leicester; the Leicester of my adulthood.

Salah should not have slipped into the United Kingdom. That error has now been remedied.

Labour has taken the opportunity to criticise the Coalition for its failures over this affair:

“The Government’s rhetoric of being tough on border controls has just been exposed as an incompetent sham.

“The Home Secretary needs to urgently explain why an individual banned from this country has just been allowed to walk in and instead of being stopped at the border now has to be pursued by the police instead.

“Yesterday Theresa May said that coming to this country was a privilege and she would refuse entry to Britain of anyone that she deemed not conducive to the public good. Her words now ring very hollow indeed.

“The Home Secretary has already undermined the UK Border Agency, cutting its staff by 5,000, its budget by 20% and has failed to appoint it a chief executive.

“She needs to understand the importance of an effective border agency to deal with cases like these and to make sure that this does not happen again.”

She is right. Steps do need to be taken to ensure that once executive decisions are taken, they are implemented in an effective manner. Such failings happened under Labour as well: this is not a party political matter.

What is a party political matter is the  involvement of three Labour MPs in today’s event, at which Salah was to speak, which was originally scheduled to be held in the Houses of Parliament, but which was then moved to a secret location, only to be disclosed, on a one to one basis, by Middle East Monitor and the Palestine Solidarity Campaign.

Incidentally, this sort of cloak and dagger routine is precisely how the neo Nazi, David Irving, organises his events.

The three Labour MPs involved in this event are Jeremy Corbyn, Richard Burden and Yasmin Qureshi.

Well, the event is still on. And apparently, it is back at the Houses of Parliament. Labour has reportedly banned MPs from appearing on a platform with Salah:

Mainstream Labour MPs were horrified, while the MPs involved are understood to have been told by party managers they must not share a platform with Salah.

But will these Labour Members of Parliament attend the meeting, sans Salah? You can be pretty sure that they will. Corbyn has no qualms about appearing on platforms with racists and antisemites, and defends the organisations which support these vicious people. Remember his protest over the exclusion of Abou Jahjah, whose Arab European League was fined for publishing racist cartoons, which denied the Holocaust?

As a footnote to all this, let’s not forget that Monday’s Salah event was co-organised by the Islamic Forum Europe: the outfit which runs the East London Mosque and London Muslim Centre, which is at the centre of a new homophobia storm today. The Islamic Forum Europe is right at the heart of the leading “Blue Labour” project, London Citizens, who pulled out all the stops to defend their deputy Chair and Trustee, Junaid Ahmed, when he was exposed as an  outspoken Hamas supporter.

There’s a lesson in this. Don’t get involved with racists and supporters of terrorism. It might play well with the little merry-go-round of Middle East Monitor, the Islamic Forum Europe, the Islamic Human Rights Commission, the Palestinian Solidarity Campaign, the Socialist Workers’ Party, and all these other nasty but hugely energetic groups.

The end of the beginning?