Andrew Gilligan in The Telegraph reports:

Lutfur Rahman, the controversial directly elected mayor of Tower Hamlets, took a coachload of people, including a number working for the council, to canvass for Labour at the Leicester South by–election. The visit took place during working hours on a weekday. Asked by The Daily Telegraph, the council refused repeatedly to deny that the staff were on duty at the time.

The Labour candidate, Jon Ashworth, won that by election.

Ted Jeory draws our attention to this video:

What this video shows, very clearly, is the anti-Labour Mayor of Tower Hamlets, Lutfur Rahman receiving the thanks of the Leicester South campaign, at the victory rally.

Lutfur Rahman is a candidate who is very closely tied to the Islamic Forum Europe, a far Right organisation tied to the Islamist Bangladeshi party, Jamaat-e-Islami, whose leading members are presently on trial for their involvement in the Bangladeshi genocide of 1971. The activities of the Islamic Forum Europe, and their close links to Lutfur Rahman and his team, have been well documented on various blogs and documentaries. They are a vile and dangerous organisation, whose politics stands in opposition to everything that social democrats cherish.

He was expelled from Labour, because he ran against Labour. Yet here he is, at a Labour Party post-election meeting, boasting about his contribution to a Labour victory.

This is what the video shows:

At the very beginning of this video, you can see a victorious Jon Ashworth thanking his supporters. In the front row, with their backs to the camera you can see the nodding heads of Lutfur Rahman and his deputy Ohid Ahmed. Ashworth then leaves the gathering and then Leicester East MP Keith Vaz manages proceedings. The Tower Hamlets contingent are singled out for praise and then at about 5mins 23 secs in, Vaz lays it on with a trowel. Ohid is picked out for setting up the Labour Friends of Bangladesh and Vaz describes how successful that group’s meeting at last year’s party conference was when 500 people packed into a Manchester restaurant. (He fails to mention that Lutfur and Ohid were both absent, having just been kicked out of the party..).

Then at about 7mins 30secs, Lutfur says a few words about how much of a “progressive” he is and how “we have come to show our support for the progressive elements of Ed Miliband’s Labour party”.

So, this is how it will go.

Lutfur can’t be readmitted to Labour immediately. The opposition to him is too strong. Not only is he known as the man who stood against Labour: he is also disliked for his failure to support Labour’s candidate, Rushanara Ali, during the General Election. Labour is a party which takes loyalty seriously.

However, Lutfur Rahman and the Islamic Forum Europe are happy to bide their time, and build up their support. They’ll get their alliances straight, and then they’ll make their bid for reintegration into Labour. At some point, they’ll judge that the time is right: probably once there has been a change in Labour’s NEC, and when Lutfur Rahman’s most powerful foes have left or have been marginalised. They can afford to wait.

What we’ve seen in Leicester is, essentially, a dry run of the argument for re-admission. Essentially, the case will be this. First of all it will be said that Lutfur Rahman was the victim of an Islamophobic witch hunt, run by the Right wing press (i.e. Channel 4 Dispatches). Secondly, all sorts of  Labour Party stalwarts will be wheeled out to testify to Luftur Rahman’s progressive credentials and his hard work for Labour causes. Finally, and most importantly, the benefits of harnessing what Islamic Forum Europe activist, Bodrul Islam called the “block Bengali vote” will be emphasised.

Why is this so significant? Well, Jon Ashworth, who is a former adviser to Gordon Brown, is a serious player in Ed Miliband’s camp as head of party relations. Keith Vaz, we know tried last year to ensure Lutfur remained a Labour party member and he is still determined to get him back in. By inviting Lutfur & co to campaign for a mate of Ed Miliband’s, speaking in Leicester mosques and using his Bengali connections, Vaz would have ensured Lutfur earned a few loyalty points.

Now, if you talk to Labour Party people, they’re absolutely clear. Lutfur will not be readmitted to Labour. The machinations of Vaz will go nowhere. We’ll have no sneering traitors in the Party.

However, don’t underestimate the Islamic Forum Europe. They have institutional strength. They’re full timers. They have build some strong alliances within Labour, and will only make their push when the time is right.

Labour must resist the Livingstonisation of the party. You can’t build a strong and stable political movement out of a coalition of fringe and extreme confessional groups.  Forget the “block Bengali vote”: only national parties win elections.

Fancy that. Join the dots. 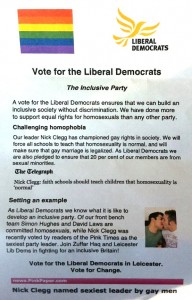