Raed Salah is an obnoxious hate preacher who starts riots. The political party he runs mourned Osama Bin Laden, and called him a “Sheikh” and a “Martyr”. Those who killed him were said to be working for “Satan”.

Salah was rightly excluded by the Home Secretary from the United Kingdom last week.

However, unbelievably, the UK Border Agency failed to stop him from actually getting into this country. He is now touring the UK, and will speak at meetings alongside various Labour Party MPs: Richard Burden, Jeremy Corbyn, and Yasmin Qureshi. Labour peer Alf Dubbs is possibly appearing as well. One of his meetings is being organised by Sarah Apps, the wife of former Labour MP, Martin Linton.

This is a scandal.

The more worrying concern is this. We have a Border Agency that cannot keep excluded people out of the United Kingdom. This is by no means the first time that this has happened, either.

A banned Islamic extremist has been allowed to walk through Britain’s border controls unchallenged.

Raad Salah was excluded from the UK last week by Home Secretary Theresa May, on the grounds that he holds hard-line anti-semitic views.

But when the political firebrand travelled here at the weekend, border guards, who are supposed to check all passengers against watchlists of fanatics, failed to spot him or turn him away.

Whitehall sources say the Home Secretary, who is determined to take a tough stand against extremists views, is furious at the blunder.

Earlier this month, she unveiled  the Prevent strategy which said ministers would no longer tolerate those who hold forth on views likely to foster hatred or division.

One possibility is that the UK BorderAgency failed to serve papers on Salah informing him that he had been excluded – effectively a travel ban designed to keep him out of the UK.

This could mean he did not know he wasn’t meant to travel. Alternatively, he may have used another name which officials failed to spot.

Either way, it is another massive blow to the reputation of UKBA, long derided as a shambles by MPs. Keeping out terror suspects and extremists on Government watch lists is one of its most vital jobs.

One source said: ‘This is a total disaster. It’s probably the first test of the new Prevent strategy  and UKBA has failed it spectacularly.’

What a stunning failure.

habibi adds: unsurprisingly, “Friends of Al-Aqsa” want to hear from Raed Salah too. They will host him in Leicester this evening. 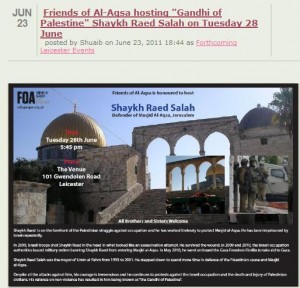 Friends of Al-Aqsa is the fanatical Israel hatred group of Ismail Patel. Patel is just back from Gaza, where he paid homage to Hamas. He’s second from right in the centre row in this picture with Hamas leader Ismail Haniyeh. 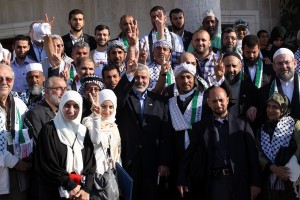