Cross-posted from James Bloodworth at Obliged to Offend 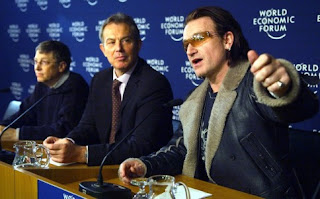 “Bono”, as you were probably aware, is the lead singer of the band U2. His real name is Paul David Hewson. Aside from being the frontman of one of the world’s biggest rock bands, Mr Hewson also fancies himself as something of an activist, and can often be seen hobnobbing with world leaders and entrepreneurs such as Bill Gates, encouraging them to “give generously” to some worthy cause or another. He has even been given a knighthood and nominated for the Nobel Peace Prize several times.

U2 performed on the Pyramid Stage at Glastonbury Festival on Friday evening. During the band’s set, Art Uncut, an offshoot of UK Uncut, unveiled a 20ft balloon with “U Pay Your Tax 2” emblazoned on it in huge letters. Scuffles between security goons and protesters ensued before the balloon was eventually pulled down.

Art Uncut’s criticism of U2 is essentially this: Bono, the rich Irish rock star and campaigner against Third World debt, is asking the Irish government to contribute more to Africa. At the same time, he and his band have reduced tax payments that could help fund that aid.

The accusation refers to the 2006 decision by U2 to move their tax liability from Ireland to the Netherlands. The move came after Ireland scrapped tax breaks that allowed musicians and artists to avoid paying taxes on royalties.

The answer to that question is of course those asking for more government revenue to be diverted to the world’s poor. The term “tax-efficient” is little more than cover for the denial of money earmarked for the exchequer – and in effect hospitals, schools and, importantly in this case, the international aid budget.

This is not the first time U2 have been in the spotlight for their self-interested financial projects. In 2006 Bono helped found a venture capital firm called Elevation, named after the U2 song of the same name. In August 2006 Elevation announced that it had made an investment in Forbes Media, the parent company of Forbes magazine and Forbes.com. Sources stated that the deal gave Elevation a stake of more than 40 percent of the company. After Elevation invested in Forbes, while U2 raked in the money, the employee pension plan was frozen. In the years that followed, there were numerous rounds of layoffs worldwide.

Journalists Richard Tomlinson and Fergal O’Brien have also written that Bono used the band’s 2006 Vertigo world tour to promote Bono’s ONE Campaign while at the same time “U2 was racking up $389 million in gross ticket receipts, making Vertigo the second-most lucrative tour of all time, according to Billboard magazine. . . . Revenue from the Vertigo tour [was then] funnelled through companies that are mostly…structured to minimise taxes.”

On 15 December 2005, Paul Theroux published an op-ed in the New York Times called The Rock Star’s Burden that criticised stars such as Bono, Brad Pitt, and Angelina Jolie, labelling them “mythomaniacs” and “people who wish to convince the world of their worth.”

Bono and Bob Geldof’s attempts to “save” Africa during the Live Aid and Live 8 concerts were notoriously short of actual African faces; and the latest Hollywood fashion accessory – a fly-speckled African baby – smacks of a patronising colonial attitude. As Theroux went on to say: “[When] Brad Pitt and Angelina Jolie [were] recently in Ethiopia, cuddling African children and lecturing the world on charity, the image that immediately sprang to my mind was Tarzan and Jane.”

The Dragon’s Den entrepreneur, James Caan, even went so far as to offer an impoverished family 100,000 rupees – about £745 – for a baby on a recent trip to Pakistan.

On the outside, Bono and his ilk smell of the soft and cuddly capitalism of the noughties. The capitalist elite at the time liked to think it was presenting a new face to the masses. They tore off their ties, threw open their shirt necks and, as Terry Eagleton put it, “fretted about their employees’ spiritual well-being.”

What did not change was the substance behind the feel-good rhetoric. Espousing megalomaniacal platitudes is perfectly well and good, but when it comes down to it, if you are simultaneously cutting the feet from under your own government’s ability to provide for the very poorest in the developing world, then your stance is worse than meaningless: it is rank hypocrisy.

As Clement Atlee pointed out some half a century ago, “Charity is a cold grey loveless thing. If a rich man wants to help the poor, he should pay his taxes gladly, not dole out money at a whim”.