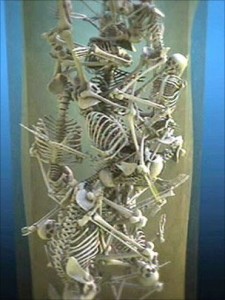 The BBC has the news of a likely ethnic cleansing of a Jewish family in Norwich in the 12th or 13th century:

The remains of 17 bodies found at the bottom of a medieval well in England could have been victims of persecution, new evidence has suggested.

The most likely explanation is that those down the well were Jewish and were probably murdered or forced to commit suicide, according to scientists who used a combination of DNA analysis, carbon dating and bone chemical studies in their investigation

Seven skeletons were successfully tested and five of them had a DNA sequence suggesting they were likely to be members of a single Jewish family.

DNA expert Dr Ian Barnes, who carried out the tests, said: “This is a really unusual situation for us. This is a unique set of data that we have been able to get for these individuals.

“I am not aware that this has been done before – that we have been able to pin them down to this level of specificity of the ethnic group that they seem to come from.”

Pictures taken at the time of excavation suggested the bodies were thrown down the well together, head first.

A close examination of the adult bones showed fractures caused by the impact of hitting the bottom of the well. But the same damage was not seen on the children’s bones, suggesting they were thrown in after the adults who cushioned the fall of their bodies.

The BBC has an an explanation as to why these Jews were massacred:

Sophie Cabot, an archaeologist and expert on Norwich’s Jewish history, said the Jewish people had been invited to England by the King to lend money because at the time, the Christian interpretation of the bible did not allow Christians to lend money and charge interest. It was regarded as a sin.

So cash finance for big projects came from the Jewish community and some became very wealthy – which in turn, caused friction.

“There is a resentment of the fact that Jews are making money… and they are doing it in a way that doesn’t involve physical labour, things that are necessarily recognised as work… like people feel about bankers now,” said Ms Cabot.

You might not know it, but there were other groups in Medieval England who performed and banking and lending function: the Cahorsin, for example. They were, of course, criticised for lending at interest, particularly because they were Christians. I do not believe that they were generally massacred.

Of course, these days, it is still commonly said that Jews control the banks: despite the fact that they don’t.

Another explanation for the persecution of the Jews is given in the text box at the side of the article:

1100s: Resentment against the Jewish community grows over their perceived wealth and belief they killed Jesus. The “blood libels” – Jews are accused of the ritual murder of Christian children.

A slightly more detailed examination of these themes in Medieval thought in the article would have been welcome.

Oh, and anti-Jewish ‘well poisoning’ accusations became popular a century or so after this massacre took place, as an explanation of the Black Death.

Now, I’m not a big one for the sanctity of ancient human remains. I don’t think that every fragment of bone dug up during an archeological investigation should be handed over to a religious or cultural institution for reburial with all the sacred rites. However, I do have considerable sympathy for the requests of, for example, indigenous Australian cultural groups who have been hunting down and securing the return of the skeletons of their relatives from museums, over the past few years. There is a particular justice in those requests. In many cases, these skeletons were obtained shortly after the death of their owners, by a culture which had little interest in the people who had once inhabited those bodies, except as curiousities. The preservation of their skeletons as exhibits and specimens is both an expression and a continuation of the degradation they suffered in life.

This is a family of real people, remember. Who lived together, squabbled, loved. Who joined together for Shabbes, around the candles. And who were then thrown headfirst down a well.

So, let photographs and casts be taken of these bodies. Then let them have a proper burial, at last. I’d happily say kaddish for them.