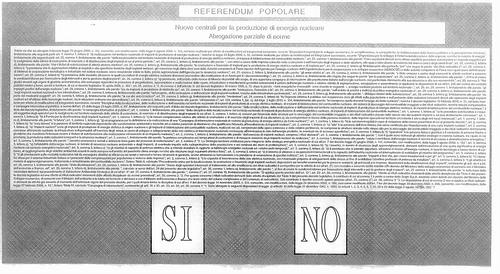 Maybe it is because of the obvious verbosity of at least one of the questions (photograph courtesy of Mark Pack) in four referendums held in Italy this month, but I have some difficulties in seeing this as a death knell for nuclear energy in across Europe.

Or even Italy, as Wiki offers the distilled wording for concerning the renewal of nuclear generation as:

To tell the truth, I do not know what these decrees and regulations state precisely; and doubt the Guardian journalist does either, let alone Anglophone greens praising this to the rafters. At most, this seems like a rejection of said pieces of esoteric legalese with the door to support by Joe Publicinni to some form of nuclear generation not being closed.

It is also to be noted that the previous nuclear station in Italy closed in 1990, meaning that considerable investment would be required to renew it as opposed to countries with an existing infrastructure. Furthermore, as seen with recent German decisions to scale back on nuclear generation, the acceptance that electricity generated in this manner still may be sought from France or Poland.

The other questions, as presented by Wiki were:

Heading: Procedures for the awarding and management of local public services of economic importance. Repeal?

Description: This question, if passed, would repeal the rules that currently allow the management of local public services to be entrusted to the private sector.

Heading: Determination of the water service tariff based on an adequate return on invested capital. Partial repeal of regulations?

Description: The question proposes the repeal of the regulations governing the determination of tariffs for the supply of water, the amount of which currently provides for a return on capital invested by the operator.

Heading: Repeal of Provisions of Law Number 51 of April 7th, 2010, on legitimate impediment of the Prime Minister and Ministers to appear in criminal court, in accordance with sentence number 23 of 2011 by the Constitutional Court. Repeal?

Description: The question proposes the repeal of the regulations of legitimate impediment of the President of the Council of Ministers and the Ministers to appear in a criminal court, in accordance with sentence number 23 of 2011 by the Constitutional Court

With turn-outs not below 94% nationwide, all received majority approval. I am sceptical of referendums to direct single policy issues under any case, preferring to put trust in an accountable and open body of elected representatives who consult with a professional civil service and policy advisors.

Where referendum questions are couched in such esoteric legalese or plausible leeway, my doubts are raised. Which areas of regulations would the populous be willing to see repealed on the “water service tariff based on an adequate return on invested capital”, for instance?

The crushing defeat to Berlusconi’s aims, however, are noteworthy: to the extent that he attempted to discourage voters from attending, so to avoid reaching the stipulated minimum of 50%. And the fourth question, which removes the bar on his being subject to criminal prosecution, is about bloody time too.

The Italian Greens are to be credited for marshalling opposition to the nuclear question, but all four returned similar results. Because of the way in which that ghastly orange spiv presiding over the Council of Ministers divides Italian opinion, I cannot help but think that had there been a fifth question recommending the “banning of oxygen dihyride.  Si or shaddapaya face, bunga-bunga” (note, Italians are not a race, so this is not racism), the response would have been in the affirmative.

A Word on Democracy