Here is a segment of an interview on Sky with Nabil Ahmed, the president of the Islamist student group FOSIS.

I know precisely the quote that she’s talking about [Houriya Ahmed]. The police actually did an investigation into this quote just a couple of years ago because it came on the telly then. And it was actually proven that he did not actually make this quote.

This is a reference to Abu Usamah At-Thahabi, an imam at Green Lane Mosque in Birmingham, being exposed as an extremist by the Undercover Mosque broadcast. Unfortunately for Mr Ahmed, this tape of Undercover Mosque shows him to be a liar.

Thahabi himself has admitted that he said what Undercover Mosque showed him saying, while appealing to that old friend of dodgy Islamists, “context”.

For more of Thahabi’s horrific statements, please see this post.

Thahabi is just the sort of extremist all of us, including Mr Ahmed, should be challenging. Instead Ahmed seeks to defend him.

This is the FOSIS way with extremists.

Here’s another line from Nabil Ahmed in the Sky interview:

We have never worked with any extremist individual, nor should we or would we.

Here is Ahmed himself attending a “Friends of Al Aqsa” event just two weeks ago. It celebrated the pro-Hamas Gaza convoy and called for support for the next one. Friends of Al Aqsa is run by Ismail Patel, one of the UK’s most fanatical Israel haters and a Hamas supporter. Patel has spoken at FOSIS events in the past. 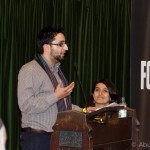 Three weeks ago Ahmed spoke at an East London Mosque event featuring several extremists who support the killers of British troops in Afghanistan and Iraq.

This weekend FOSIS will hold its annual conference at Cardiff University. One of the speakers is Muhammad ibn Adam al-Kawthari. He is the man who wrote this:

After criticism, Al-Kawthari added this “disclaimer” to the post:

I once again reiterate that the implementation of the law on adultery and fornication is only applicable under an Islamic State, and as such, this is merely an academic and theoretical discussion, since Britain is not an Islamic state. The aim is to provide insight into the Islamic legal system to enrich understanding, debate and discussion. I do not of course endorse the implementation of this law in places where people choose not to have it.

No that doesn’t make it OK. Such a state would bring oppression, misery and cruelty to its people. The very idea must be challenged, not promoted.

Al-Kawthari also has some “yes we can” advice on jihad:

From the above we can conclude that Jihad in places like Kashmir is personally obligatory for the people of that land. My respected teacher Mufti Taqi Usmani once mentioned that the Jihad in Kashmir is defensive because it belongs to Pakistan according to the constitution on which Pakistan was formed. However if the people of Kashmir, Chechnya, etc. are not capable of defending themselves or if they are neglectful, then Jihad will become personally obligatory on the Muslims nearest them, e.g. Muslims of Pakistan. If they are also neglectful or weak, then the Muslims nearest them, and so forth, until it becomes personally obligatory for all the Muslims.

You can now decide and see for yourself what actually the legal ruling will be in these lands in accordance with the above explanation, and whether the Muslims are neglectful or not.

Who else does FOSIS want to hear from? Over the last three years speakers at its events have included the following:

– Hamas enthusiast Haitham Al-Haddad. The Gaza war made him happy because “it clearly encouraged Muslims to prepare themselves for jihad, all over the world”.

– Canadian Islamist Muhammad Alshareef, who has said Jews should be hated and shunned. As for gays, Muslims should be “proud” to be called homophobic and need to harass gay rights demonstrators.

– Abdur Raheem Green, the head of iERA. It is an organisation which specialises in staging extremist conferences, such as this one at the Ibis hotel in southwest London which led to a furore earlier this year. Three of iERA’s foreign advisors have been banned from the UK.

– Uthman Lateef, a gay hating and “don’t help the police” extremist. He appeared at events featuring Anwar Al-Awlaki into 2009, when it was very clear that Awlaki was a leading Al Qaeda operative.

– Creepy Stephen Sizer, the church friend of extremists, including the racists and Hamas supporters of Viva Palestina Malaysia.

– Notorious preacher Riyadh ul-Haq, who hates the West and Jews and supports the Taliban.

FOSIS also did its bit to complicate the police investigation of Umar Farouk Abdulmutallab, the undie bomber. Qasim Rafiq of FOSIS was his “close friend” when the pair were at UCL.

Pull the other one, Mr Ahmed.

Actually, don’t. Just admit that you and FOSIS have long been part of the problem, that you regret it, and that you will challenge extremists from now on.

If you don’t, as Houriya Ahmed says in the interview, Theresa May’s take on FOSIS is “spot on”.