Here is an announcement of a meeting in Parliament later this month. It is being organised by the Palestine Solidarity Campaign and Sara Apps, the wife of former Labour MP Martin “Tentacles” Linton. (Click the image to enlarge.) 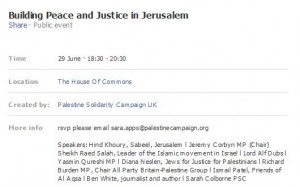 Note that three Labour MPs are scheduled to speak: Richard Burden, Jeremy Corbyn, and Yasmin Qureshi. Labour peer Alf Dubbs is another speaker. They will be joined by Ismail Patel and Ben White, among others.

But the star of the show is likely to be Raed Salah. 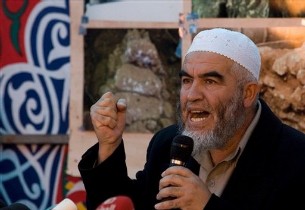 Salah is the head of the northern branch of the Islamic Movement in Israel. He is a thug, a racist, and a Hamas supporter. One of his special skills is starting riots. You can read more about his background here and here.

This dreadful blood libel sums him up well:

“We have never allowed ourselves to knead [the dough for] the bread that breaks the fast in the holy month of Ramadan with children’s blood,” he said. “Whoever wants a more thorough explanation, let him ask what used to happen to some children in Europe, whose blood was mixed in with the dough of the [Jewish] holy bread.”

“Great God, is this a religion?” he asked. “Is this what God would want? God will deal with you yet for what you are doing.”

So does this, published by Daud Abdullah’s Middle East Monitor:

During an academic conference held in Kiev, Ukrainian academics accused Israeli companies of kidnapping 25,000 Ukrainians for their organs.

….at another event he stated that the Jews are “butchers of pregnant women and babies… Thieves, you are the bacteria of all times… The Creator meant for you to be monkeys and losers… Victory is with the Muslims, from the Nile to the Euphrates.”

This is characteristic too:

The Western Wall “is part of Al-Aqsa’s western tower, which the Israeli establishment fallaciously and sneakily calls the ‘Wailing Wall’. The wall is part of the holy al-Aqsa Mosque,” added Salah
…
According to Salah’s sermons, which can be found on his group’s websites, Jews have absolutely no connection to the ‘al-Buraq Wall’, the name given by Muslims to the site.”The Mugrabi Gate is part of the western wall of al-Aqsa,” says Salah in a sermon number 32, which can be found on his websites dedicated to his organization.

“He who says that the Jews or the Israeli establishment has any right to al-Aqsa, even to just one stone – this is an abominable attack, a falsehood, completely baseless,” says Salah, “he among Palestinians, Arabs or Muslims who accepts this, is a traitor to Allah and his prophet.”

You see, Israelis are worse than Nazis:

The head of the Islamist Movement in Israel, Sheikh Raed Salah, stated at the International Popular Congress for Supporting Palestine, currently taking place in Turkey, that Zionism is identical to Nazism, and that if the Nazis did, indeed, perpetrate the Holocaust, today Israel was perpetrating more than a holocaust against the Palestinian people.

The Home Secretary has the power to exclude or deport non-British citizens on grounds of national security and, in some circumstances, to deprive people of British citizenship. In 2005, the then Home Secretary announced that those who engage in what were termed ‘unacceptable behaviours’ would normally be excluded from the UK. Unacceptable behaviour includes public speaking or publishing material that foments, justifies or glorifies terrorist violence or fosters hatred which might lead to inter-community violence in the UK or otherwise can be demonstrated as providing support for extremists.

We shall see if David Cameron’s government lives up to its word and excludes Raed Salah from the United Kingdom.