Some people who objected to Cardiff City Hall hosting a Cageprisoners fundraiser last weekend received this message from the council:

The Cage Prisoners Event is being actively supported and promoted by the Muslim Council of Wales, an organisation who works in partnership with the Council and the Welsh Assembly Government to support the counter terrorism agenda.

Following receipt of your email the authority has sought further advice regarding this event, including from South Wales Police, and has been assured that Cage Prisoners organisation does not fall into a category that should be automatically rejected as they do not support radicalism but simply advocate justice and due process of law for those accused of it.

Let’s look at just a few episodes in the Cageprisoners record:

– Cageprisoners promoted “inspirational” Al Qaeda preacher and recruiter Anwar Al-Awlaki well into 2009, when it had been abundantly clear for months from Awlaki’s own blog, written in English, that he was an Al Qaeda operative. Moreover, anyone familiar with extremism, and this must include Cageprisoners, has known for years that Awlaki was a dangerous extremist. It has been seven years, for example, since the US named him as a “spiritual advisor” to two of the 9/11 hijackers.

– Cageprisoners published an article asking what on earth could be wrong with Muslims living in Britain going to Afghanistan to fight NATO forces alongside the Taliban.

– One Cageprisoners activist, Asim Qureshi, has assured young British Muslims that they can – of course – go to jihad. In fact, at a Hizb ut-Tahrir demonstration in London he said supporting “our brothers” in jihad all over the world, including in Iraq and Afghanistan, is “incumbent” on Muslims.

– Moazzam Begg, the figurehead of Cageprisoners, openly supports the Taliban. His multiple links with terrorism stretch back to the 1990s, when the police and MI5 first took an interest in him.

– The organisation tells Muslims not to help MI5 counter-terrorism officers in any way.

– Cageprisoners’ patron, Yvonne Ridley, who was one of the speakers at the Cardiff fundraiser, has told British Muslims they should “boycott” the police. She has also sought to justify horrific Al Qaeda bombings in Jordan, called Chechen mass murderer Basayev “a martyr” whose death made her “sad”, funded Hamas, and incited hatred with gross antisemitic rhetoric.

This is the kind of organisation all of us should challenge. Instead, the Muslim Council of Wales has sponsored it in its fundraising operations. This is why the Welsh government’s answer to a freedom of information request is so funny in a grim way:

MINABW / ADFYWIAD 3-Year Programme Total Cost: £102,782.92
Muslim Council of Wales was funded to develop a 3-year programme of work from August 2009 to March 2012 to build the capacity of mosques, as well as Muslim youth and women’s organisations, to increase the resilience of Muslim communities in Wales to Al Qa’ida influenced violent extremism.

Mr Kidwai is really not the man to turn to in any anti-extremism campaign. In addition to the Cageprisoners sponsorship, consider his stance on hate preacher Zakir Naik back in 2006:

Saleem Kidwai, secretary general for the Muslim Council of Wales, invited Mr Davies to go to conference and listen to what Dr Naik had to say.

He said: ‘Dr Naik is one of the most uncontroversial Muslim speakers.

‘He talks about the similarities between religions and how we should work on the common ground between them.

‘It’s very important that he speaks in Cardiff because he is a great authority on various religions and has helped to bring people together – educating the educators – that is the name of the conference.

‘For Mr Davies to call him a hate-monger just shows his level of knowledge and expertise.’

Naik’s record demonstartes that this is an absurd stance to take. Naik has since been banned from the UK.

Kidwai is also a trustee of the Dar ul-Isra mosque in Cardiff, alongside Munir Ashi. Ashi is an imam at the mosque and a Hamas funder. He wants Israel to “disappear” in an onslaught by “Muslim armies”.

The mosque pushes some very intolerant ideas. For example, is your wife neglecting her prayers? You should “discipline” her. If that doesn’t work, don’t have kids with her! Get rid of her!

We share your anxiety about your wife and we advise you to delay having children with her and to try again with her. If you see that she is praying regularly on time and is serious about it, including first and foremost Fajr prayer, and she is obeying you and fulfilling the rights that you have over her, then be patient with her for a while and see how things go. Try to discipline her and teach her, and be patient in putting up with her crookedness and weakness, in the hope that Allah may guide her and set her straight.

But if you find that she is persisting in neglecting the prayer or trying to interfere with your religious commitment and objecting to your beard, then there is nothing good for you in her and we advise you to leave her before having children from her, which would only make the problem more complicated.

The mosque took that charming advice from Islam Online, the website of hate preacher Yusuf Al-Qaradawi. He too has been banned from the UK.

The mosque also has interesting guests. Next weekend it will welcome an Islamist group called iERA. 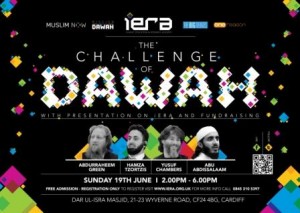 It was an iERA conference in London that prompted Peter Tatchell to condemn the hotel company Ibis for providing a venue for a meeting of vicious homophobes. Ibis and its parent company Accor have since stopped hosting extremists.

iERA is the outfit of Abdur Raheem Green. Green defends hate preachers and terrorists, engages in conspiracy theory denial about terrorism, says secular democracy is “antithetical to Islam”, and believes that gays and adulterers should be stoned. He will be a speaker at the Dar ul-Isra meeting.

Another speaker will be Abu Abdissalam. He says counter-terrorism officers are waging a war on Islam and must not be helped. He too stands up for terrorists and supports stoning under Islamic law. He is so extreme that even Tower Hamlets has banned him from council facilities.

Or consider iERA’s advisors. iERA took the page down recently, but the proof that they included three men who have been banned from the UK is shown here (click to enlarge). They are Zakir Naik, Bilal Philips and Hussein Yee. Other iERA advisors include Abdullah Hakim “death to gays” Quick and Hamas enthusiast Haitham Al-Haddad. 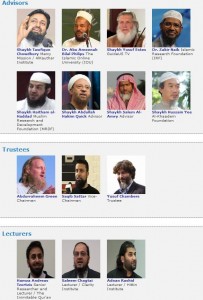 Mr Kidwai will also be a speaker at the FOSIS conference in Cardiff next weekend. Men attending the conference will be put up at Dar ul-Isra.

FOSIS is the Muslim student group with a long record of its own of promoting hate preachers and denial of the problem of extremism on campus. Kidwai’s fellow speakers at this event will include Hamza Tzortzis and Muhammed ibn Adam Al-Kawthari. Uthman Lateef, another “don’t help the police” extremist, was also on the original speaker list. Magically, his name disappeared on the day the government presented the Prevent review. But you can see the proof that he was billed here.

Mr Kidwai and the Dar ul-Isra mosque where he is a trustee are part of the problem, not the solution.

At the very least it is to be hoped that official Wales will learn the lessons from the record and stop funding his council.