In September 2007, “Amina Arraf” started a blog on Blogspot.

There is no hint here that this novel is, in any sense, autobiographical.

What catches my eye, is the way the author seems to enjoy playing with fact and fiction, and leaving her readers to work out which is which. Amina’s second post revealed:

I am trying to write two novels, a collection of pseudo-historical essays, and a religious manifesto. The first novel is called “A Thousand Sighs and a Sigh: an Arab American Education” and is, often but not always, the story of a young woman quite a bit like me. The second is a time travel story called “1096”. The third is “The What-Ifs of the Arabs” and will be essays on alternate histories of the Middle East. The fourth is my thoughts on religion, ethics, and philosophy and I call it “Why I am Still a Sunni Muslim”.

I am curious if anyone is actually reading this … and, if so, what you all think of it thus far … and what sorts of theings you’d like for me to post next (ie, long sections of spiritual reflection, steamy sex scenes, historical background, family tales, intellectual journeys, friendships, love, odd customs …). I’ve posted a simple poll (over there to your left) so, if you’ve read this, vote … or post a comment.

Amina is not simply a name, but is now a political blogger living in Damascus, worried about the Assad regime. She has a photo identity that she claims is real, yet belongs to someone else.

She said she was this woman: 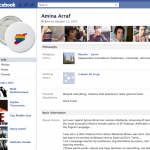 Amina’s politics and her writings leave reason to be suspicious.

Last week, Newsnight published a bizarre report, about the alleged arrest of a gay girl in Syria, Amina Arraf, who had been arrested for her outspoken views on the Assad regime, and her pioneering blogging. Yet the photo used by Amina actually belonged to another woman, Jelena Lecic – a Croatian girl in London.

Here is the Newsnight story:

Yet “Amina” had told her readers that the picture she uploaded onto her blog, was of herself.

She wrote, when she started blogging:

I live in Damascus, Syria. It’s a repressive police state. Most LGBT people are still deep in the closet or staying as invisible as possible. But I have set up a blog announcing my sexuality, with my name and my photo. Am I crazy? Maybe. […] I have to begin by doing something bold and visible. I can, because I’m a dual national and have benefits of politically connected relatives, be more visible than many women here. I’m already out to my family … and I want to be an example to others … to know that one of is trying ..

This is particularly odd. If it were too dangerous for “Amina” to post her name and photo, then why did she publish a fake one? Surely the normal course of action, would be to simply blog under a pseudonym, not post a photo, and explain why this is the case. Instead, Amina’s decision put another woman in the spotlight.

“Amina” assumed the identity of Jelena Lecic, and claimed to be a bold woman posting her own photograph. The Jelena Lecic incident should prompt people to ask searching questions of “Amina Arraf”.

So should this paragraph, in which Amina argues against Western sanctions on Syria:

As a Syrian-American dual national living in Damascus, I am deeply concerned over all of this. Now, before I give my reaction, let me state my bonafides: I have been involved in pro-democracy protests and activities here since February, I have personally witnessed government forces killing demonstrators, I have been tear-gassed, I have been batoned, I have been detained – and only a few hours ago, the Mukhabarat (secret police) visited me at home and, for the moment, they were persuaded not to arrest me. So, I am no friend of the regime!

If you get a police visit related to your blogging, your next move is not to cheerily blog about it – trust me.

Furthermore, I think it would be very odd, for someone who has narrowly escaped the Mukhabarat, to start publicly arguing against sanctions for Syria, and then mention the secret police in passing. What is the possible motivation? The whole post is simply odd.

Today the Electronic Intifada has published an expose of “Arraf”, connecting her to the politically-active couple Tom MacMaster and Britta Froelicher in the following ways:

Here are some further events worth noting:

Both Froelicher and MacMaster push the idea of CNN and the American media, consciously lying about the Middle East to favour Israel. MacMaster wrote a piece in 2002 entitled “Protesting the CNN biased coverage“, which began:

On Sunday June 30, a sweltering summer day in Georgia, a crowd of 150 people gathered along a busy Atlanta street across from CNN (Cable News Network) headquarters in downtown Atlanta. Chant’s of “CNN Stop Lying, Palestinians are dying,” and “CNN-half the story, all the time” echoed along Marietta street.

As EI point out, MacMaster has since been active in the Students for Justice for Palestine group at Edinburgh University, presenting a paper called “A Very Brief History of Palestine”.

Froelicher is a Quaker, and a member of the American Friend Service Committee . She has also been involved in constructive Arab-American projects, such as the Alif Institute. In 2008, Froelicher headed up a very noble project, leading a donation drive to benefit 600 Iraqi families settling in Atlanta on behalf as the Alif Institute.

One wonders whether there’s any kind of link in her mind, between her desire to be involved in these projects helping women from the Middle East, and her allegedly pretending to be one.

Here is Froelicher talking to Stephen Sizer about her work with AFSC:

As you can see, Froelicher is a hardline anti-Zionist, refusing to entertain the idea of a two state solution. She campaigns actively against the US two-state policy in Israel-Palestine.

When Syrian protestors died on the border with Israel last week, having thrown Molotov cocktails onto landmines, Amina began a rant against Zionists, in which she called them “baboons”:

The occupier already is claiming that all of this was orchestrated by that fiendish mastermind, Bashar Assad. From this side of the mountain, that looks frankly ridiculous. I suppose they think he also masterminded these ‘puppets’ of his in kadima

Of course, they like to believe that theirs is the world’s most moral army and all sorts of inane platitudes to their powers of loving kindness. Here’s a good example of the most moral soldiers in the world, the elite shining light to the goyim, showering their morality down on some depraved sons of Amalek

Why would “Amina” defend Assad here?

The point I got from this, is she took the Assad line on this event. You’d think she’d pick up on the fact Assad was distracting attention from the massacres in Syria by blaming the Zionists. But instead, she defended Assad from the Zionists.

“Amina” mocks those suspicious of Assad, by suggesting he is a “fiendish mastermind” in their worldview.

Yet Assad is the man whose secret police nearly arrested Amina in Damascus!

How could “Amina” possibly miss Assad using these events to distract attention from his own brutal policies?

All the evidence points to “Amina” being an invention of MacMaster and Froelicher, despite their protestations otherwise.

Froelicher has previously hosted an event on Israel and Syria. In December 2008, which she invited the Syria ambassador in the USA, to discuss Israel’s role in the region. She then wrote up the event in an article, entitled Waging Peace in Atlanta:

Is peace about to break out between Syria and Israel? Are the talks sponsored by the Turkish government going to lead to a lasting peace agreement between the two countries? Will the Golan Heights be returned to Syrian control soon? What part can Turkey play? What about the new Obama Administration? And how would this affect the regional balance?

Froelicher has a deep interest in Syria.

She presented a paper to the British Society of Middle East Studies this year, in which she argued:

The external perception of Syria’s economy is relatively negative. Most scholars find that Syria is moving into a Russian-style ‘crony capitalism’, in which well-connected individuals have de-facto monopolies with the government’s blessing. […] My research hypothesizes that the reasons for this course of development have little to do with culture and religion or that – as the ‘transition paradigm’ tried to claim – any particular form of development is ‘natural’. Rather, the negative external perceptions of Syria’s economy also impact the desire and ability of western governments to interact positively with Syria, creating a self-perpetuating cycle of mistrust and suspicion. Furthermore, security concerns deepen an existing conservatism towards reform internally.

Froelicher is an associate fellow at the University of St. Andrews. She is researching the topic  “Economic Reform and the Syrian Textile Industry“.

And so the story comes back to the University of St. Andrews. The Guardian has previously highlighted the university’s ties to the Assad regime:

Following questions from the Guardian about its relations with figures associated with the regime – and “in view of significant international concerns about recent events in Syria” – a spokesman for St Andrews said the university would be reviewing the centre’s work “to ensure its high academic standards are maintained”.

The university’s association with the Assad regime has come under scrutiny in the wake of the violent crackdown on pro-democracy demonstrators in Syria which is estimated to have claimed 450 lives so far.

In addition to Khiyami, who the Foreign Office confirmed last night had been invited to the royal wedding, the centre’s board of advisers also boasts figures closely associated with the Damascus regime, including Fawaz Akhras, the charismatic British-based cardiologist who is not only Bashar al-Assad’s father-in-law, but also acts as a gatekeeper for the family, screening British journalists before they are granted an interview with his daughter Asma al-Assad or his son-in-law.

Akhras is also the founder of the British Syrian Society, which has organised visits to Damascus and meetings with Bashar al-Assad for sympathetic members of parliament, as well as organising an investment conference in London to introduce British, European and Arab businesses to Syrian government ministers.

Opened in November 2006 as part of the university’s school of international relations, funding for the centre was only secured with the assistance of Khiyami, who, according to the centre’s head, Prof Raymond Hinnebusch, persuaded Syrian-born British businessman Ayman Asfari to pay for it.

Now, a research fellow at the University of St. Andrews is allegedly pretending to be a political prisoner in Assad’s Damascus.

‘Amina’ has, in the past few minutes, wiped all comments from her fake blog, including a ton of evidence that she is nothing but an out-and-out fraud.

Tom MacMaster has now put up a post on the “Gay Girl” site claiming he’s been the “sole author” of all the posts supposedly from “Amina Arraf”.