Imagine the UK facing an extremely serious terrorist threat from far right white racists with multiple international connections. Scores of innocent people had already been already killed. The numbers would have reached three or even four figures if excellent work by the police, the security services, and allies abroad had not disrupted plot after plot. The threat persists and the security work continues.

In the midst of this crisis a campaigning group is set up for the people caught in the security dragnet. It paints them as poor persecuted victims. It ceaselessly promotes ideologues and ideas closely connected to the terrorist campaign, including one of the biggest terrorist group’s most prominent recruiters. It denigrates its opponents as “anti-white racists”. And it gets quite practical too, issuing this advice to suspects, for example:

The goal of MI5 is to gather intelligence and they will try their hardest to extract as much as they can from you with each meeting. Anything they may offer, in terms of monetary incentives/jobs, is solely for their own benefit and not yours – and it is worth remembering that. Again, never think that any question they ask is innocent. Don’t give away any personal details about yourself or anyone else, however harmless they might seem.

Now, do you think such a group should be allowed to hire a city hall for a fundraising meeting?

That is just what Cardiff has done in the case of Cageprisoners. The Taliban supporters and jihad lovers will hold a fundraiser at Cardiff City Hall this Saturday (click to enlarge). 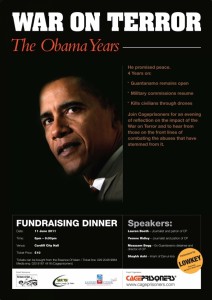 If you think a public sector building should not be used for this extremist meeting, why not contact the council. 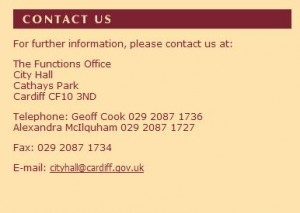