Dean Godson of Policy Exchange has a pair of unsurprising yet remarkable lines in an opinion piece on the Prevent review in The Times. This is the context:

Effecting this quiet revolution will not be easy. But party politics has been the least of Mr Cameron’s problems. Nick Clegg has not taken a very active interest in the review – perhaps because he had no manifesto commitment on the subject, unlike control orders. Ed Miliband and the Labour front bench have offered little opposition to the Munich agenda: after all, who wants to be seen to be supporting funding for Islamist reactionaries?

So what is the problem?

Rather, the bulk of the resistance to Munich has come from Whitehall and particularly from the highest reaches of the Office for Security and Counter-Terrorism within the Home Office. Senior mandarins wanted a free hand to pick credible (ie, radical) Islamist partners as a supposed counterweight to al-Qaeda.

These panjandrums did not want support for attacks on British troops to be included within the definition of extremism in the glossary of terms at the end of the document. Their resistance to this key bit of text was eventually overcome thanks to the efforts of Lord Carlile of Berriew, the Liberal Democrat and independent overseer of the Prevent review, who was backed up by Mr Cameron.

This is an appalling and inexcusable betrayal of the British armed forces by their civil service colleagues.

Indeed, one civil servant has himself supported attacks on British soldiers and – unbelievably – kept his job. Here is Azad Ali, formerly the head of the Civil Service Islamic Society, appearing today as a spokesman for the Muslim Safety Forum on Radio 4:

“But Azad Ali, chair of the Muslim Safety Forum and an adviser to the previous Labour government, said the new policy was “a conflation between security and cohesion”.

The Prevent strategy, he said said, was supposed to be a “counter-terrorism strategy, it isn’t an ideology strategy”.”

Azad Ali, you’ll remember, wrote a blog defending the killing of British troops in Iraq. When this was reported by the Daily Mail, he sued for libel. The judge dismissed the case out of hand, and said that his claim had an “absence of reality”.

Here’s another problematic issue. This is a picture of Nabil Ahmed, the head of FOSIS, at an extremist meeting of “Friends of Al Aqsa” just a week ago. It was convened to celebrate and back pro-Hamas Gaza flotillas. Friends of Al Aqsa is led by Ismail Patel, a Hamas supporter and an antisemite. This is just the latest episode in a very long record of extremism at FOSIS. 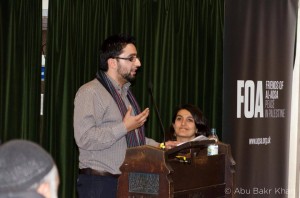 It seems idiots and knaves in Whitehall don’t want to know or don’t care. Godson writes:

The Federation of Student Islamic Societies (Fosis), which engages in relentless agitprop among Muslim students, is specifically criticised for the role it has played. Again this was inserted in the face of opposition from Home Office mandarins.

When will the government get its own house in order?

When will these people be removed from positions of responsibility which they are abusing in such a grotesque manner, to the detriment of the country they are supposed to serve?