Some years ago the Austrian weekly “Zur Zeit”, edited by Andreas Mölzer, an MEP of the Austrian Freedom party, published an article denying Nazi crimes– a criminal offence according to Austrian law. The Austrian police found the author of the article, and he was prosecuted and sentenced by an Austrian court. However the police did not want to (or simply could not) find out which editor sent the article to the printer, although it is highly improbable that a freelance author could publish an article without the knowledge of an editor.

The same attitude seems to prevail in the case of the Austrian Neo-Nazi website “Alpen Donau”. Once more the Austrian police appear unable or unwilling to find the perpetrators who breach Austrian law. In either case Austria has a serious problem. Pointing out that the website is operated from the USA is a rather lame excuse.

“Alpen Donau” just published a new Logo showing the most urgent problem of the Austrian Neo-Nazis: Palestine. While their antisemitic predecessors demanded “Jews to Palestine”, they go with the times and want their “Jews out of Palestine”. They propagate their preferred method too: with guns.

Antisemitic postcard from Germany around 1890: 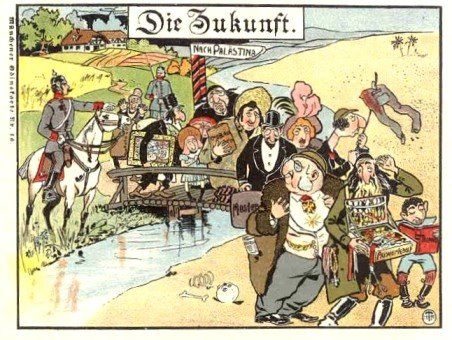