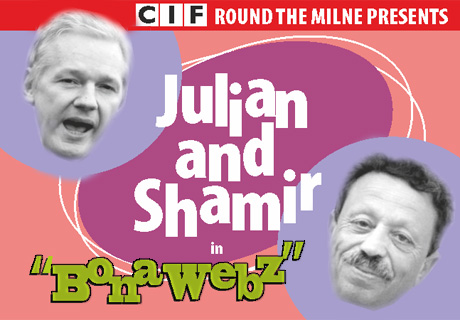 The JC reports on this absolutely shocking development:

The notorious antisemitic journalist Israel Shamir was actively involved in developing the WikiLeaks network – and was not just another freelance writer who happened to strike up a working relationship with the website’s founder Julian Assange, according to newly-revealed correspondence.

Emails seen by the Swedish anti-racist magazine, Expo, demonstrate that the two men co-operated for several years. As early as 2008 Mr Shamir was asked to recommend potential associates in Sweden. He suggested his own son, Johannes Wahlström: “He is a Swedish citizen, and lives in Sweden. Probably, he’ll be able to give advice about press freedom.”

An email from June 2010 shows that Mr Shamir was still playing a part in the Swedish WikiLeaks network at that point. “I have a lot of good guys who can help to analyse the treasure and it would be good to start spreading the news,” he told Mr Assange. “I am now in Paris, and people want to know more! Tuesday I go to Sweden, and there is a whole operation for your benefit!” Mr Assange replied: “There certainly is! Tell the team to get ready. Give them my best. We have a lot of work to do.”

WikiLeaks and Mr Assange have always played down their links to Mr Shamir, for obvious reasons.