Cross-posted from Justice for Iranian Workers 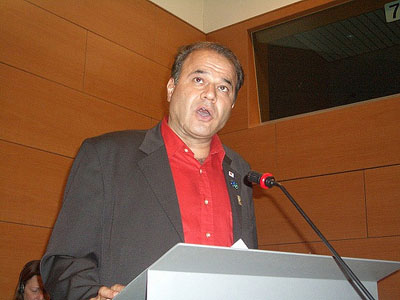 The ITF is delighted to announce that imprisoned trade unionist Mansour Osanloo was today freed from jail in Iran almost four years since his arrest and imprisonment, which set off a storm of international protest.

His release is conditional on his ‘good behaviour’ and the payment of a bond.

The ITF (International Transport Workers’ Federation) has led demands for Mansour Osanloo’s release. ITF general secretary David Cockroft commented: “This is a great day for Mansour and his family – and for his fellow Vahed union members and those of us in the international trade union movement who are honoured to call him a friend. It’s doubly welcome given the deterioration in his health during his time behind bars.

“He is free because trade unionists worldwide demanded justice.”

He continued: “That bail has been set falls short of the full pardon we all wanted, and which the Iranian government promised, but for now we can just take a moment to savour his richly deserved return to his family.”

“But – and sadly even on a day as good as this one there has to be a but – there are other innocents in jail in Iran for the same ‘crime’ of wanting to join a trade union. They include Mansour’s colleagues, Reza Shahabi and Ebrahim Madadi. For all of them, and us, the fight is not over. As much as we welcome the Iranian government’s move and its finally listening to reason, we know we must renew our insistence that those other prisoners are set free and the threat of re-arrest lifted from Mansour, and then commit the ITF, our member unions and friends in the trade union and human rights movements to campaigning on their behalf.”

The Vahed Syndicate responded to the news by saying that they would like to thank everyone who has fought so hard for his release.

Mansour Osanloo was a bus driver and is the president and one of the founding members of the Vahed Syndicate, a free trade union representing Tehran’s bus workers. From its beginnings in 2005 the ITF-affiliated union was subjected to heavy repression, including repeated attacks and arrests. Mansour Osanloo was heavily targeted. As well as being beaten up and having his tongue slit he was imprisoned in 2005 and 2006. Then in 2007, just one month after visiting the London head office of the ITF and meeting trade unionists in Brussels, he was arrested. Three months later he was sentenced to five years imprisonment on charges of ‘acting against national security’ and ‘propaganda against the state’; in 2010 another year was added to his sentence. In reality his only offence was to help found a genuinely democratic trade union.

For more details, including a film, press releases and history, please see www.itfglobal.org/campaigns/freeosanloo.cfm

(Hat tip: Eric Lee of LabourStart, a key part of the campaign to free Osanloo)