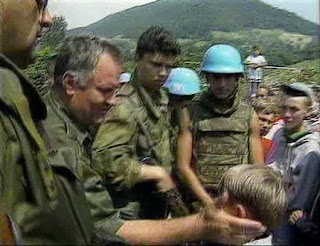 When telling truth to power morphs into attributing blame for every event to one power in particular.

Judges today rejected an appeal by Ratko Mladic to prevent his extraditionto a U.N. tribunal, paving the way after almost 20 years on the run for Mladic to face charges for the worst atrocities in Europe since the Second World War.

The political geeks among us (of which I include myself) are perhaps wondering what Noam Chomsky has to say on the subject, considering the content of much of what the man has previously said on the issue over the years. (One would of course be forgiven for not wondering, insomuch as one has the justifiable feeling that none of what Mr Chomsky says any longer matters all that much.)

For a long time there has been ample evidence detailing the massacre of 8,000 Muslims in Srebrenica during the summer of 1995. There is, in fact, more detailed evidence of this particular genocide than most other crimes against humanity that occurred during the 20th century. An international tribunal, established by the UN, has already convicted a Bosnian Serb general of aiding and abetting genocide in Srebrenica – and looks set to convict another.

Some works released in the years following the genocide attempted to play down Serb atrocities, one of which was Diana Johnstone’s revisionist tract Fools’ Crusade. The work itself has since been thoroughly discredited. Marko Attila Hoare described the book as “little more than a polemic in defence of the Serb-nationalist record during the wars of the 1990s – and an ill-informed one at that…In short, she is an armchair Balkan amateur-enthusiast, and her book is of the sort that could be written from any office in Western Europe with access to the internet.”

Chomsky, though, together with a clutch of others including Tariq Ali, signed an open letter to the Swedish magazine Ordfront defending Johnstone’s dubious works, after the magazine was hit with a flurry of complaints following their publication of an interview with Johnstone in which she again downplayed the genocide in Bosnia. The letter, signed by Chomsky, read: “We regard Johnstone’s Fools’ Crusade as an outstanding work, dissenting from the mainstream view but doing so by an appeal to fact and reason, in a great tradition.”

The behaviour of Chomsky in this instance should be put into the context of the wider reaction of certain sections of the left to all Western intervention – no matter that intervention in this case happened altogether too late. The method of Chomsky and his acolytes is straightforward: select an action taken by the West – whether in Kosovo, Rwanda, or Libya (or in this case belatedly in Bosnia and Herzegovina) – invert the role of perpetrator and victim, before forming a conclusion which lays the blame for every atrocity at the door of Western intervention or a Western ally in the region. If this means denying or downplaying genocide committed by those opposed to Western forces, then so be it.

Chomsky himself even went as far as to say of Johnstone’s book that she “…argues – and, in fact, clearly demonstrates – that a good deal of what has been charged [in Srebrenica] has no basis in fact, and much of it is pure fabrication.”

Asked later whether he regretted supporting those who said the Srebrenica massacre was exaggerated, Chomsky said “My only regret is that I didn’t do it strongly enough.”

In this vein was the response of the American academic and other long-time Noam Chomsky associate Edward Herman. On Kosovo Herman, wrote John Feffer in Foreign Policy in Focus, “manages to construct an alternative universe in which Serbian military forces only acted in defence, Slobodan Milosevic was a benevolent Gorbachev figure, and the international legal community functioned as some kind of adjunct to NATO”.

Chomsky, however, was as reluctant to distance himself from Herman as he had been from Johnstone. Instead, not only did he defend Herman’s right to deny genocide, but he consistently praised Herman’s body of work – including that which explicitly denied the Srebrenica massacre. It begins to appear as if it is not Herman and Johnstone’s right to free speech that Chomsky is defending, but rather their dubious and disgusting views.

It is not only Chomsky’s friends who implicate him however. Chomsky himself, when referring to the Srebrenica massacre, continues to place the word genocide in quotes, despite the fact that, as mentioned earlier, an international tribunal has convicted a Bosnian Serb general of aiding and abetting genocide.

Now that another of Slobodan Milosevic’s murderous generals is about to face trial, it seems a good time to ask: Isn’t it time for an apology Mr Chomsky?

Credit to Marko Attila Hoare, whose blog material proved extremely helpful in putting together my modest contribution to the critique of the cult of Chomsky.