It has been a long time coming for Delwar Hossein Sayeedi. 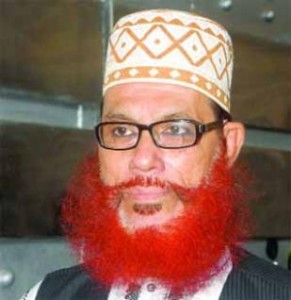 The 4,074-page report in 15 volumes — the 77-page investigation report in one volume that proposes formal charges and the 3,997-page case diary in 14 volumes — will be submitted to the prosecutors today, said the investigation agency’s coordinator, M Sanaul Haque, at a briefing in the agency’s office on Bailey Road.

‘We have got enough evidence to prove Sayedee’s involvement in murder, rape, arson, robbery as well as mass killing during the War of Independence in 1971. And the report has been based on the evidence and documents,’ said Sanaul at the briefing.

On 2 November, 2010, the tribunal ordered Sayedee’s detention for his alleged involvement in war crimes in Pirojpur, his home district, where some 30,000 people were reportedly killed and their bodies dumped in 12 mass graves.

Moreover, at least 300 women were allegedly tortured and looting took place in at least 35 houses and 146 houses were set ablaze, and Sayedee was involved in most of the incidents, according to the investigators.

The investigators visited Pirojpur and found evidence of murder, rape and genocide ‘committed by Sayedee’ in Pirojpur Sadar and Zia Nagar upazila in 1971, they said.

Sayedee has been a guest of honour at the East London Mosque. This is unsurprising.

The Department of Communities and Local Government has identified the links between the South Asian Islamist party, Jamaat-e-Islami, and the East London Mosque.

“The [Jamaat-e-Islami (“JI”)] helped to create and subsequently dominate the leadership of the MCB, currently the largest Muslim umbrella body in Britain, with around 500 affiliates representing a broad set of orientations. Vying for the leadership of the MCB are the Pakistani and Bangladeshi wings of JI, alongside the Muslim Brotherhood and some politicised Deobandis. The current Secretary General is the Chair of the East London Mosque, the key institution for the Bangladeshi wing of JI in the UK.”

The East London Mosque houses the Islamic Forum Europe, a controversial organisation which is also aligned with Jamaat-e-Islami, which was the subject of a recent Channel 4 Dispatches documentary. It was established by Choudhry Mueen Uddin, who was accused in a Channel 4 documentary and by Bangladeshi human rights campaigners of involvement in war crimes, when active in a Jamaat-e-Islami aligned militia during Bangladesh’s War of Independence. Mr Mueen Uddin denies these allegations.

Delwar Hussain, in a piece for Open Democracy, notes:

A Bangladeshi Jamaat MP, Delwar Hossain Sayedee, has regularly appeared at the mosque and raised funds for his party there. These visits are controversial: older Bangladeshis accuse him of involvement in the massacres of Bengalis during the liberation war. But the Jamaat has made strenuous (and successful) efforts to distance itself from its extremist and anti-Bengali past, and young, third-generation, British-born Bengalis have demonstrated in support of Sayedee’s presence.

It is striking that a party with the Jamaat’s record can attract young people in Britain, when for the most part, they have little interest in the politics of their parents’ or grandparents’ country. In south Asia, the party has drawn support from those both promoted and dislocated by modernisation – middle-class people (teachers, lawyers, and engineers among them) repelled by western ideas and attracted to the ideological rigour of fundamentalism.

Indeed, societies in transition often generate fundamentalism. In London, the absence of a Bangladeshi middle-class has meant that support for the Jamaat was negligible, but it has discovered another constituency: the British-educated Bengali working class, those at the bottom of Britain’s social pyramid, heirs to endemic poverty and exclusion. The path of social advancement may be closed to them elsewhere, but the doorway to rightwing, fundamentalist theology is broad and always open.

Attempts have been made, in the past, to exclude Sayedee from the United Kingdom. The Times reported in 2006:

The Home Office and the Foreign and Commonwealth Office considered excluding Delwar Hossain Sayeedi, an MP in Bangladesh who preaches violent hatred against the West and is accused of war crimes, last year. But despite a series of e-mail exchanges in September, his visa was never revoked and the Home Office issued no exclusion order.

The Foreign Office’s Islamic issues adviser accused Mr Sayeedi’s detractors of being politically biased and said that his exclusion could jeopardise support from mainstream Muslims for the Government’s anti-terrorism agenda.

Mr Sayeedi was last in Britain weeks after the July 7 bombings. Tomorrow he is scheduled to visit a housing fair at the London Muslim Centre, part of the East London Mosque. The mosque’s chairman, Muhammad Abdul Bari, is the newly elected leader of the Muslim Council of Britain.

In leaked e-mails seen by The Times, the Home Office sought advice from research analysts in the Foreign Office while considering the case for excluding Mr Sayeedi.

Internal messages between advisers discussed the threat that he allegedly posed, and one attached a report from a Bangladeshi human rights organisation. The report quotes Mr Sayeedi as saying that Britain and the US “deserve all that is coming to them” for overturning the Taleban in Afghanistan.

The e-mail from one adviser, Eric Taylor, continues: “He [Mr Sayeedi] has made a particularly offensive comment about Bangladeshi Hindus, comparing them to excrement. He also appears to defend attacks against the Ahmadiya (Islamist) community.

“. . . Previous visits to the UK have been reportedly marred by violence caused by his supporters. In 2000, during one of his talks in Oldham, his supporters reportedly attacked and beat up five Bengali elders.

“A rally in Banglatown was also attacked and three people, including a 65-year-old, were injured. A Bangladeshi community group wrote to the Prince of Wales in June 2004 appealing for Sayeedi to be banned from the UK.”

However, Mr Sayeedi’s case was defended by Mockbul Ali, the Foreign Office’s Islamic issues adviser, who voiced “extreme concern” about the political bias of sources being used to criticise the MP.

This is what happened, when Martin Bright (then of the New Statesman) tried to make a programme about the East London Mosque’s links to this war criminal:

The Foreign Office has been putting pressure on Channel 4 to remove sections of the programme. They were concerned about references to is a Bangladeshi MP called Delwar Hossein Sayeedi, who has called for the death of US troops in Iraq. Despite repeated requests the FCO has refused to confirm whether he has been granted a visa. Now I know why they were so worried: he is due to speak at a rally in east London this weekend and at theEast London Mosque.

This is the politics that London Citizens is promoting and legitimating, by means of its advocacy of the East London Mosque, London Muslim Centre and Islamic Forum Europe.

It should be as great a scandal as the London School of Economics’ relationship with the Gaddafis. But it isn’t.

I understand the impulse to ‘reach out across the divide’ that motivates liberal Rabbis to get involved in the ELM and LC networks. But those Rabbis should understand this.

Every time they stand in solidarity with these organisations, not only are they betraying Muslim liberals in the United Kingdom: they are also betraying the Bangladeshi intellectuals and patriots, murdered in the 1970s by Jamaat-e-Islami militias.