Earlier this month this blog covered Andy Slaughter, Labour MP for Hammersmith and shadow justice minister, helping out the fanatical Israel haters and Hamas supporters of “Friends of Al Aqsa”. 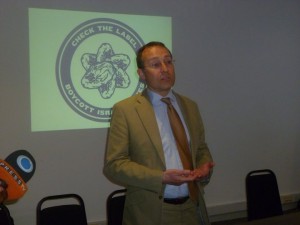 If he’ll cross that line, why not another one? According to an announcement from the self-styled Palestine Solidarity Campaign, here you go:

The world in which Sameh Habeeb lives right now is revolting. He is the hate publisher who runs the Palestine Telegraph website. Those who have read this blog for some time will be familiar with him.

He hasn’t changed since he last appeared here. For example, see this recent piece on his website from Khalid “Kikes” Amayreh. Who is more evil, Al Qaeda or the USA? Easy:

We must be honest; this was not a showdown between good and evil. In fact, if one is to be faithful to one’s conscience and rectitude, one must acknowledge the fact that the U.S. has always represented the greater evil whenever compared to bin Laden as one can always multiply the number of bin-Laden’s victims a hundred or even a thousand times in order to have a general idea about the magnitude of America’s criminality and terror against Muslims and other peoples of the world.

As ever, though, Israel is Amayreh’s main target, and out comes the trademark Nazi insult:

Having said that, however, I believe that all the rationales of political correctness in the world must not prevent me from proclaiming the facts about this manifestly evil entity which can be said, more or less, to be a carbon copy of Nazi Germany.

If you’re not familiar with Mr Habeeb, other episodes in his hate publishing past include:

– Publishing a ludicrous story about Israelis stealing organs in Haiti after the earthquake.

– Threatening legal action against “Nothing British About the BNP” when it criticised Habeeb for his role in inviting Hungarian neo-fascist Krisztina Morvai of the Jobbik party to a London conference of the pro-Hamas Palestinian Return Centre.

– Publishing another Israelis-are-Nazis slur and a ludicrous terrorism denial piece by Mahboob Khawaja. No wonder Khawaja engages in terrorism denial: his own son, Mohammed Momin Khawaja, was convicted in 2009 of taking part in the UK fertiliser bomb plot. The judge in the case suggested he should have known what his son was up to. For example by noticing the, er, collection of rifles and crates of ammunition in the basement of the family home.

Andy Slaughter is a disgrace to the Labour Party and to Britain.