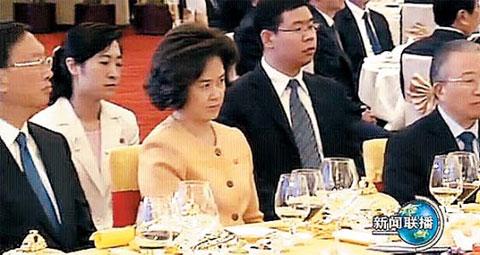 Chosun Ilbo reports that earlier this month Kim Jong-il was confident enough – or maybe quixotic, irrational and capricious – to snub Hu Jintao after Chinese aid to the Hermit Kingdom failed to materialize.

Such things are to be expected to happen in a country where going to an Eric Clapton concert can be interpreted as a sign of deliberate discourtesy.

What is striking about this article is that it provides a new photograph of Kim Ok (above), the fourth and current consort of Kim Jong-il.

Believed to be in her late 40s and graduate of the Pyongyang School of Music, she began her work with Kim Jong-il as his favourite after-dinner pianist in the late 1980s, before joining and being promoted within the Personal Secretariat. One of the first times she was identified was as a member of Jo Myong-rok’s support staff during visit to the USA in 2000, as the young woman at the top right of thie following photograph. 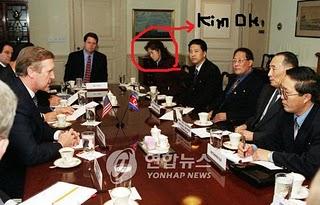 Kenji Fujimoto, personal chef to Kim Jong-il, however, disputes that this woman is the Kim Ok he knew; and who is known to have accompanied Kim Jong-il on his official visit to China in 2006, where she was introduced as his wife; two years after the death of his previous consort, Ko Yong-hi from presumed breast cancer.

Like any young new wife of an older man, she took a keen interest in his children, especially Kim Jong-eun during his grooming as successor.

Confusingly, in 2009, Joogang Ilbo reported that she had married an official from the Korean Workers’ Party. Straight away, convention meant that she should have withdrawn from professional life. But, convention also should have meant that her former role as a consort made marriage unlikely.

And now she appears to be back. Although, I must say, I preferred Kate’s dress.