Shabana Mahmood is the Labour MP for Birmingham Ladywood. She is also a shadow Home Office minster.

Like her fellow MP Andy Slaughter, she is a Labour front bencher who is happy to work with Hamasniks. On 31 May she will be one of the speakers at an event celebrating the thugs, racists and Hamas supporters who joined last year’s Gaza flotilla. The event is organised by Friends of Al Aqsa, the Israel hatred group of Ismail Patel.

The event will also feature calls for support of the next flotilla. Once again it will be led by Turkish charity IHH, one of the world’s biggest and most enthusiastic funders and promoters of Hamas. The UK side of the operation is being managed by Hamas operatives Mohammed Sawalha and Zaher Birawi.

This is the line-up (click to enlarge) for the Friends of Al Aqsa event. Notice a familiar name? 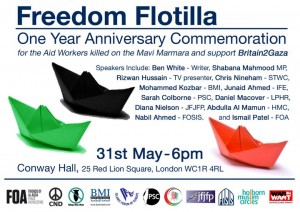 Yes, it appears Shabana Mahmood is prepared to share a platform with Junaid “Hamas are Heroes” Ahmed, the IFE trustee and activist and deputy chair and trustee of London Citizens.

Here is some more background on Ahmed’s salute to Hamas which illustrates his extremist ties.

The speech was recorded at a “Gaza: Martyrs Meadow!” event organised by Azad Ali’s “Easy Talk”. Ali is of course the civil servant who has said he loves Al Qaeda preacher Anwar Al Awlaki, wants a caliphate ruled by Hamas leader Ismail Haniyeh, and supported the jihadi killers of British troops in Iraq. 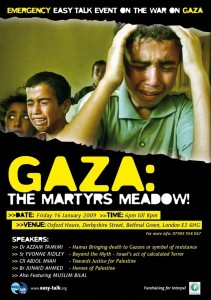 So joining up with the likes of Ben White, Sarah Colborne of the PSC, and Ismail Patel at the Friends of Al Aqsa flotilla thug celebration is a natural move for Ahmed.

It is also a natural move for Labour MPs, even front benchers. There is no price to pay in the party for helping Hamasniks. None at all.

That’s how bad things are.