Another day, another friendly meeting with mass murderers. That’s life for George Galloway.

Here he is earlier this week in Beirut meeting Abu Imad al-Rifa’i, the “Lebanon representative” of Palestinian Islamic Jihad (PIJ). Other leaders of the terrorist group were also at the meeting. 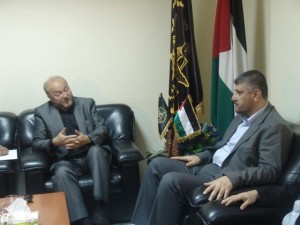 PIJ was grateful for the visit:

For his part, Rifai thanked Galloway and his delegation for the efforts they are making in Europe and many countries of the world in support of the Palestinian Cause

PIJ is dedicated to the destruction of Israel. It has a horrifying history of suicide bombings of civilians in Israel stretching back to the 1990s. It is backed by Iran and Syria and has been proscribed by the UK.

PIJ has also said that it carried out a suicide bombing in Iraq. It was Rifa’i who proudly made the claim. Though Iraq was not allowed to distract PIJ from its core mission:

“Al-Quds Brigades brings to our people and nation the good news of the arrival of its first martyrdom to the heart of Baghdad,” said a statement faxed to news organizations.

“This is to fulfill the holy duty of defending Arab and Muslim land,” it said.

The group’s Lebanon representative, Abu Imad al-Rifai, confirmed the statement to Reuters News Agency. He said the suicide bombers had not come from Palestinian territories but from several countries.

The group, which the U.S. government lists as a terrorist organization, also claimed responsibility for Sunday’s suicide bombing in a crowded pedestrian mall in the Israeli seaside town of Netanya. The bombing wounded at least 30 people.

The bomber set off his explosives studded with nails near a group of Israeli soldiers, after a security guard prevented him from entering a crowded café, police and witnesses said.

Galloway minions Kevin Ovenden and Rob Hoveman tagged along and are shown in the picture below. 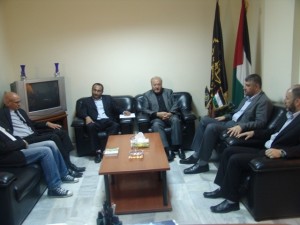 Presumably meeting terrorists is more important to Mr Ovenden than filing accounts for Viva Palestina, where he is a trustee. This is what the pro-Hamas charity’s compliance record looks like: 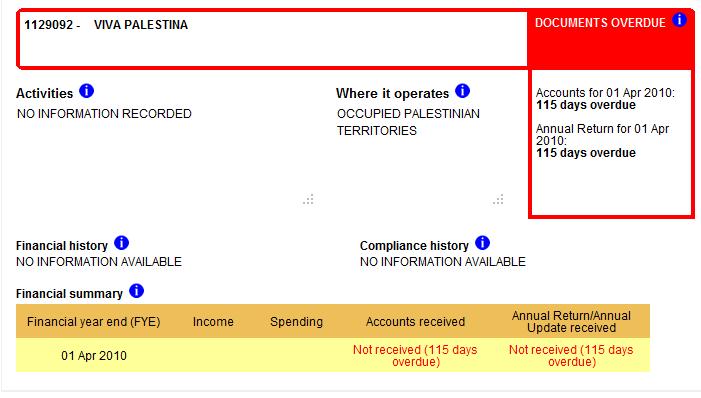 Oh well, Galloway certainly can’t be accused of letting down his important friends at home with so many foreign jaunts. Last week he found time to raise funds for “Britain 2 Gaza”, the UK arm of the next pro-Hamas flotilla, and Interpal too.

When will the UK win some sort of prize for its excellent services as a base for funding and promoting terrorists?