A review by Karl Pfeifer 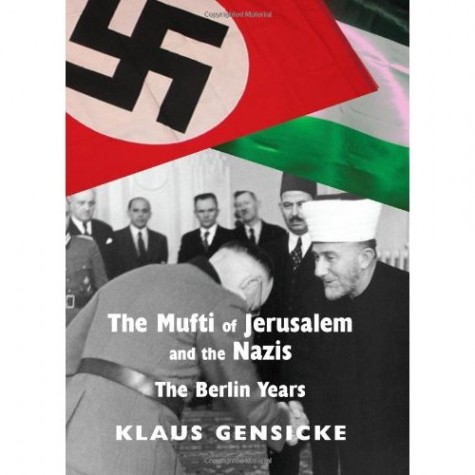 The German political scientist Klaus Gensicke has published an English translation of his seminal 2007 book. Often enough we hear from advocates of the Palestinian cause the argument that it was unfair to the Arabs, who were entirely innocent and had played no part in the mass murder of Jews during the Second World War, to let them pay the cost of what Europe has done to the Jews. Gensicke documents the efforts of the Mufti to contribute to this mass murder and shows the transparent falsity of the claim that Arabs had no share in that crime.

Yasser Arafat and Amin al Husseini were related by blood. Arafat continued the legacy of the Mufti. Both Palestinian leaders were devoted to terrorism and fanaticism. As late as August 2, 2002, the Nobel Peace Prize winner Arafat referred to the Mufti as a “hero” and an inspiring symbol in “withstanding world pressure” and remaining “an Arab leader in spite of demands to have him replaced because of his Nazi ties.”

The Mufti led the “disturbances” of 1936-39, when the number of Arabs murdered by Arabs exceeded the number of Jews murdered by Arabs. The late 1930s was the period of England’s appeasement of the Axis. In Palestine this political style led to seeking out the bully in the situation, the one most likely to go over to the Axis if not adequately appeased. England appeased the Palestinians with the White Paper issued in May 1939.

The Mufti arrived 1941 in Germany and was received by Hitler on November 28 in the presence of Ribbentropp and Grobba. The “Fuehrer” assured the Mufti:

Germany stood for uncompromising war against the Jews. That naturally included active opposition to the Jewish national home in Palestine, which was nothing other than a center, in the form of a state, for the exercise of destructive influence by Jewish interests. […] Germany was resolved, step by step, to ask one European nation after the other to solve its Jewish problem, and at the proper time direct a similar appeal to non-European nations as well.

On November 2, 1943 the Mufti received a telegram from Heinrich Himmler stating:

The National Socialist Movement of Greater Germany has ever since its emergence devoted itself to the war against World Jewry. For this very reason it has always followed with particular sympathy the struggle of the freedom-loving Arabs, especially in Palestine, against the Jewish invaders. Knowledge of the enemy and common struggle against him form the solid basis of the natural alliance between National Socialist Germany and freedom-loving Muslims in the entire world. With this in mind, I send you, on this anniversary of the disastrous Balfour Declaration, my most cordial greetings and wishes for the successful accomplishment of your struggle to its certain ultimate victory.

In a memorandum written after the war, Legation Counselor Melchers reported:

The Mufti kept cropping up all over the place and lodging protests […] At the AA [German foreign office] it was a foregone conclusion that steps would be taken – specifically by the Mufti – in protest of any activity concerning the Balkan Jews (‘Balkanjudenaktionen’). No doubt, his intervention was welcomed in the one case or the other […] The Mufti was a sworn enemy of the Jews and made no secret of the fact that he would rather see them all killed.

Gensicke quotes extensively the letters of the Mufti addressed to the German authorities and to the foreign ministries of satellite countries asking them to block emigration of Jews to Palestine. Klaus Gensicke’s authoritative study of the activities of the Mufti combines recent scholarship with a challenging, original analysis, shedding new light on collaboration with the Nazi regime.

(Klaus Gensicke: The Mufti of Jerusalem and the Nazis: The Berlin Years, 2011, Vallentine Mitchell)