Zsolt Bayer, the Hungarian writer infamous for his faecal antisemitism, has published an antisemitic diatribe against Dominique Strauss-Kahn.

One can believe that Strauss-Kahn deserves to be treated no better or no worse than any other person charged with the same sort of crime, while also finding this sort of vitriol disgusting:

We could leave it at that […]. We could lean back satisfied and think about how Strauss-Kahn wanted us [Hungarians] to suck him off about a year ago and how we disappointed him. […]

Let’s see what we know about this ‘Strauss-Kahn’ except for the fact that he is the president of the IMF and likes oral sex. We know that he was the potential challenger of French president Sarkozy. This brutal, sickening old pig [erőszakos, undorító vén disznó] would have been the left’s candidate against Sarkozy. […]

We know how lucky Sarkozy was during the last election. Do you remember? The suburbs of Paris were burning. The Arabs and other coloured immigrants had set towns ablaze and went on a rampage, beating up and killing people. And while the liberal intelligentsia issued stupid statements worldwide, the French middle class realized in the blaze of burning suburbs that they were definitely fed up with the multicultural nonsense forced on them by the likes of Strauss-Kahn [here “Jews” K. P.] because of their business interests. And while Sarkozy’s opponents uttered the usual politically correct rubbish, Sarkozy declared unmistakably that he was fed up too and would make order. And the French middle class ran off with tears in their eyes to give him their vote. […]

And if one can’t see any antisemitism in Bayer’s text there are the comments of his readers on the moderated blog of Magyar Hirlap: “The girl would probably suck off anybody, but does not like circumcised dicks.” (#115)

In comment #114 DSK is called a “matzo-devourer” and #119 states explicitly: “It’s interesting how unrestrained the sons of the chosen people are. While Cohn-Bendit rapes children, Strauss-Kahn frightens good looking women with his circumcised dick.”

Both the owner of Magyar Hirlap and the author Zsolt Bayer are close personal friends of the Hungarian prime minister Viktor Orbán as can be seen on a photo published on March 30, 2011. 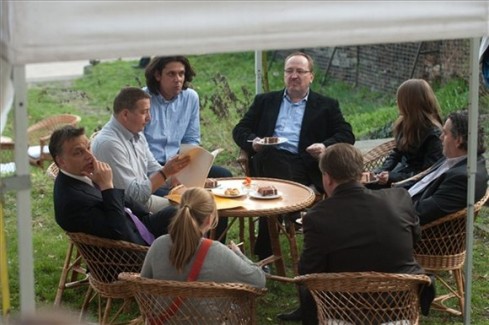 Zsolt Bayer flanked by Viktor Orbán with a violet tie and the alibi-Jew Tamás Deutsch, who never tires of whitewashing his friend Bayer.

Eva S. Balogh at the Hungarian Spectrum blog writes about the antisemitic architect Imre Makowecz, another favorite of Orbán.