First, Geoffrey Alderman wrote a column for the Jewish Chronicle in which he personally celebrated the death of pro-Palestinian activist Vittorio Arrigoni, and insisted that others do the same:

Few events – not even the execution of Osama bin Laden – have caused me greater pleasure in recent weeks than news of the death of the Italian so-called “peace activist” Vittorio Arrigoni.

The Italian was described as a “peace activist.” But the truth is very different. Vittorio Arrigoni, a disciple of the International Solidarity Movement, had travelled to Gaza to assist in the breaking of the Israeli naval blockade. As a supporter of Hamas he was a consummate Jew-hater. His Facebook page contained not merely the customary insults aimed at Israel but explicit anti-Jewish imagery, which may have reflected in part his Catholic upbringing: one image, for example, shows Jesus under arrest by Israeli soldiers.

The death of a consummate Jew-hater must always be a cause for celebration.

Now, personally I find Alderman’s joy at the death of a man who, despite his objectionable views, had never killed anybody to be obscene, and his declaration that this brought him more joy than the death of Bin Laden absurd; but then Alderman is a misanthrope, so no surprise there.

What has surprised many was the intervention of the Guardian’s Israel correspondent, Harriet Sherwood,  who was clearly outraged at Alderman’s article and found the JC’s decision to publish it incomprehensible. Her exchange with JC editor Stephen Pollard is recorded here.  Now Mehdi Hasan has waded in. Sherwood and Hasan both seem to think that Pollard should not have published Alderman’s column. Pollard’s position is that it is up to his columnists to decide what to write, and as a basic principle he will publish it irrespective of whether he agrees with them.

Where moral outrage goes, hypocrisy usually follows. And sure enough, Sherwood seems to have forgotten that in January 2004 her own editor published an opinion piece by a certain Osama bin Laden:

My message is to urge jihad to repulse the grand plots hatched against our nation, such as the occupation of Baghdad, under the guise of the search for weapons of mass destruction, and the fierce attempt to destroy the jihad in beloved Palestine by employing the trick of the road map and the Geneva peace initiative.

The Americans’ intentions have also become clear in statements about the need to change the beliefs and morals of Muslims to become more tolerant, as they put it.

In truth, this is a religious-economic war. The occupation of Iraq is a link in the Zionist-crusader chain of evil. Then comes the full occupation of the rest of the Gulf states to set the stage for controlling and dominating the whole world.

The west’s occupation of our countries is old, but takes new forms. The struggle between us and them began centuries ago, and will continue. There can be no dialogue with occupiers except through arms. Throughout the past century, Islamic countries have not been liberated from occupation except through jihad. But, under the pretext of fighting terrorism, the west today is doing its utmost to besmirch this jihad, supported by hypocrites.

Jihad is the path, so seek it.

Now to be fair to the Guardian, they did not commission the al-Qaeda leader to write this column; they merely lifted it from one of his audio messages, and re-packaged it as a column on their opinion pages. I thought at the time it was a juvenile, faux-risqué thing to do, but if they were happy publishing bin Laden’s call to jihad in this manner then that was a decision for them. It reflected badly on them at the time, and it looked even worse some 18 months later when jihadist suicide bombers brought death and destruction to the London Underground.

I assume Sherwood does not think that Alan Rusbridger agreed with everything in the bin Laden column that he published. But if she truly believes that a responsible newspaper ought not to publish opinion pieces that welcome death and killing, then she really would be better advised to start with her own editor.

habibi, via Ed West, points me to the following column by Mehdi Hasan’s colleague at the New Statesman, the Voice of Her Generation Laurie Penny:

Nobody should be fooled by her octogenarian frailty: Margaret Thatcher is more than mortal. The rhetoric of the spending review is no doubt being rewritten as we speak, to feature sycophantic imprecations for the Tory spiritual leader’s swift recovery, but her brutally right-wing, union-breaking, worker-alienating agenda is looking remarkably robust.

Like any self-respecting tactless teenage reds, my friends and I long-ago started a kitty with which to buy booze and party streamers in the event that the Iron Lady should suddenly shuffle off this mortal coil. How impish of us. Tonight, though, it seems that Mrs Thatcher is going to have the last laugh.

Tell you what, though: let’s dig out the party hats anyway. The protests of charities, the public sector, the unemployed, the unions, women’s rights organisations and a sizeable chunk of the people haven’t scared the Coalition into reconsidering their cuts, but a big, menacing hoedown to remind them just how hatefully parts of the nation nurse the memory of Thatcherism just might. Cheap, yes – but not as cheap as the Tories.

Obviously, this is all very very different in a profound way, because it doesn’t have anything to do with Jews.

(Jews other than Laurie, that is)

Mehdi Hasan himself will share a platform this Saturday, at the East London Mosque, Dr Helbawy: a Bin Laden fan, who also supports the killing of 2 year old Jewish children? 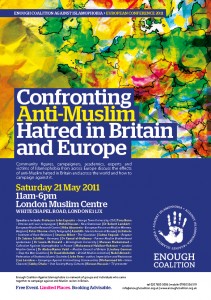 Check the other speakers – you’ll find more than one who support the killing of British soldiers, genocidal terrorist politics, and the expulsion of Jews from Israel.