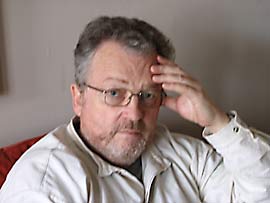 Tim Llewellyn will be one of the speakers at Middle East Monitor’s Israel bashing session next Monday, provided Amnesty International doesn’t cancel the Hamas supporters’ booking of its “Human Rights Action Centre”. 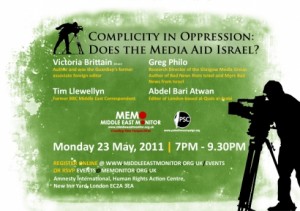 This is not Llewellyn’s first MEMO event. At a meeting this winter he said he supported boycotts of Israel and offered this observation:

The government is uncivilised and Israelis who support it take part in that uncivilisation. Israel is a rogue state in the Middle East.

It’s easy to see why MEMO would want to promote him again. Consider his views on suicide bombings. Yeah but no but yeah – context!

When suicide bombers attack inside Israel the shock is palpable. The BBC rarely reports the context, however. Many of these acts of killing and martyrdom are reprisals for assassinations by Israel’s death squads, soldiers and agents who risk nothing as they shoot from helicopters or send death down a telephone line.

As for Hamas and Hezbollah, they are great outfits that look after people:

The main reason people voted for Hamas was that they were fed up with the system. Fatah was playing games with the Israelis, arresting people and so on. It’s like Hezbollah – a well-run, efficient set-up, none of the thuggery you might expect in the circumstances. The people on the ground adore it because it is looking after them.

Outside the Middle East, you have to mind those tricky and powerful Jews:

Eager to help in this insidious process, squatting there in the gardens of Kensington, is the Israeli embassy, emanating influence and full of tricks, with many powerful friends and supporters.

For they even use deceptive names and language tricks to fool people!

He also denounced broadcasters who invited the “insidious” former US ambassador to the Middle East Denis Ross, without fully identifying him.

Mr Llewellyn said: “What a lovely Anglo-Saxon name! But Denis Ross is not just a Jew, he is a Zionist, a long-time Zionist… and now directs an Israeli-funded think tank in Washington. He is a Zionist propagandist.”
…
Mr Llewellyn declared: “The Israelis appear in studios wearing suits. They’ve learned all sorts of tricks. They are wizards at communication; they speak 10 different sorts of English, from American to South African to Canadian.” Good English, he suggested, played better with the presenters than “a Palestinian speaking down a crackly phone-line from dusty Ramallah.”

It’s scary – my how successful those devious Jews are:

No alien polity has so successfully penetrated the British government and British institutions during the past ninety years as the Zionist movement and its manifestation as the state of Israel. From the Balfour Declaration of November 2, 1917, in which the British Foreign Secretary said his government “view with favour the establishment in Palestine of a national home for the Jewish people,” (before Britain had taken possession of Palestine from the Ottomans), through the twenty-six year history of Zionist exploitation of the British Mandate at Arab (and British) expense, to Britain’s scuttle from Palestine in 1948 and the creation of Israel and the catastrophe for the Palestinians, and up to present-day connivance by the United Kingdom government with America’s unremitting political and media support for Israel and its daily violation of international laws and conventions on Palestinian lands, the Zionists have manipulated British systems as expertly as maestros, here a massive major chord, there a minor refrain, the audience, for the most part, spellbound.

Mind the Board in particular:

Perhaps the most long-standing and egregious of these organizations, dating back to the early nineteenth century, when Zionism had still to be invented, is the Board of Deputies of British Jews. This influential lobby of the Zionist Great and Good is an important example of how Israel is working its magic here.

And the US Congress too, as the sage Pat Buchanan warned:

But it’s not just the Elders. Even the students are at it!

One is the Union of Jewish Students, which elbows and induces Zionistically inclined undergraduates towards influential positions in British public life, especially the media, the banking sector and information technology.

In the end poor old journalists just cave in:

Journalists and their bosses do not like to be harangued. They like a quiet life. They know how influential the lobby is and how well-placed are its agents in and around government and business and in the ranks of the good and the great. They want their institution to survive. In this noble cause the truth about a sensitive issue may have to go hang for a while.

But surrender is no option for the brave group he will join on Monday, which includes Abdel Bari Atwan, Victoria Brittain and Greg Philo.

Nor will the assembly in Lebanon this summer at George Galloway’s “Viva Palestina Arabia” terrorism festival be so craven. Llewellyn will have very fine company there too.

His fellow speakers include Daud Abdullah of MEMO; Jeremy Corbyn, the Labour MP for Hamas and Hezbollah; Ali Fayyad of Hezbollah; Mustafa Hamdan, a Lebanese tool of Syria implicated in the murder of Rafik Hariri; Leila Khaled for hijacker chic; Azzam “Kaboom” Tamimi; Salma Yaqoob of “RESPECT”; and Bulent Yildirim, the head of Hamas funder IHH and an admirer of Chechen mass murderer Shamil Basayev.

With the “alien polity” still hard at work, it is good to know that so many courageous people like Tim Llewellyn and his fellows are prepared to meet the insidious challenge.