When I was in the army I felt invincible, I felt like nothing could touch me, as though the finger of G-d himself were upon me, safeguarding me throughout. I had the prayer for the safety of soldiers in my breast pocket during every mission. My Mum bought it for me and handed it to me, i kept it in the paper bag and held it close throughout my service, it was my luck charm and when I left I gave it to a friend in my team so that it would protect him too.

Just because we feel invincible when we are young and running around with a rifle that doesn’t make it so. Most of the time it is down to pure luck as to who gets killed and who doesn’t. Death is not good at defining who is skilled and who isn’t when he comes for us and he’ll come for all of us one day.

At this time I think that it is worth looking back t some of the guys from my unit who were killed over the years. One in particular is called Asaf Fuchs, he was killed while I was in the unit and I knew his friends though not him so well. I was at his funeral to hear his father say Kaddish for his son, I watched as his body was lowered into the earth at his kibbutz in the north of the country. I watched the team of paratroopers who had served with him cry at his grave and heard the story of his death….and life.

They were on a hilltop carrying out an ambush, the terrorist came into view and then  dropped out of sight. The team advanced on him firing all the way and killed him before he could return fire. A mistake was made and there was a second unnoticed terrorist in the valley who opened fire on the team while they were attacking the first. The team took him down too but not before one of his bullets cut down Asaf.

Not all that much to it, soldiering is dangerous, defending Israel is dangerous, you take your life into your hands when you do it. When combating an enemy who is intent on dying in order to kill, where death is a part of their operation the least you have to say to yourself is that you are prepared to risk your life in order to prevent them from succeeding, maybe they’ll succeed in taking it maybe they won’t. Today we remember those who were brave enough to make the sacrifice when the enemy stood at the gates. They left their nice warm homes to protect us and gave their lives in the process. Everything that they were and everything that they were on their way to becoming was destroyed in an instant, words simply aren’t fitting enough to do them justice yet they are all we have, today we remember them and thank them for protecting us. 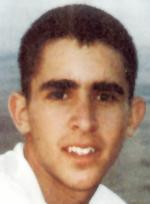