I want to be very clear. I was clear in July, and what I said in July has followed me all over the world by the American and Israeli propaganda machine, so I want to be very clear again. All dignified people in the world, whether Arabs or Muslims or others with dignity, are very proud of the speech made by President Bashar Al-Assad a few days ago here in Damascus.

For me he is the last Arab ruler, and Syria is the last Arab country. It is the fortress of the remaining dignity of the Arabs, and that’s why I’m proud to be here and addressing you this evening.
…..
The reason why Syria is being threatened is not because of anything bad which she did, but because of the good which she is doing.
…..
So I say to you, citizens of the last Arab country, this is a time for courage, for unity, for wisdom, for determination, to face these enemies with the dignity your president has shown, and I believe, God willing, we will prevail and triumph, fwa-salam aleikum.

Syria is the shoe which didn’t drop. And I have a theory for that. The Syrian regime is authoritarian, no doubt, freedoms personal and political, are, of course, scant, it is a one party state, and the father in this case successfully handed over power to the son. So on one level it is a candidate [for an uprising]. And yet it has not. And what is the reason for that? Well, here is my theory: the government of Syria for a long time has pursued a policy of Arab-ness. Of Arab nationalism, of Arab dignity, of support for the Palestinian cause, material support, material support for the resistance, rejection for the foreign occupation of Iraq. And a refusal to bow before the foreign powers. This is the perception, and it is largely the reality, though the perception is greater than the reality. And I think that has somehow inoculated the Bashar Al Assad regime from the kind of events we are seeing elsewhere. Of course Syria is not the richest place, and there are extreme divisions between the very rich and very poor, but most people support the government because of its stand on Arab issues and the West. They think that Bashar is heir to a tradition of which they are quite proud.

These may be famous last words, but that is my take on it.

Every time we hear about this: 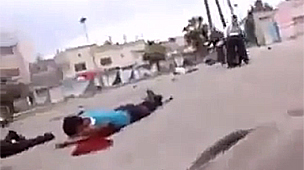 A Syrian human rights group has accused the government of carrying out “10 days of massacres” against protesters in the southern city of Deraa.

The Damascus Center for Human Rights Studies (DCHRS) says snipers and anti-aircraft machine guns are being used to fire on unarmed civilians.

Recent amateur video appears to show dozens of unarmed protesters being shot and bleeding to death on the streets.

The government is trying to quell seven weeks of protests that began in Deraa.

In cities across the country, protesters are calling for greater political rights and personal freedoms. Some are calling for the downfall of the regime of President Bashar al-Assad.

Amateur footage uploaded on YouTube on 26 April appears to show tanks firing indiscriminately on unarmed protesters. The BBC has not been able to contact the person who shot the video, but it appears to be credible.

The men are heard screaming for ambulances and shouting “You dogs, you traitors, you child-killers, Assad you dog”.

Gene adds: This appears to be a later video of Syrian tanks firing on unarmed protesters. (Arab dignity, Baathist style, I suppose.)