Yvonne Ridley says that she was very much opposed to the NATO military action against Gaddafi, for a host of familiar reasons, but has now changed her mind:

A few short weeks ago I stood on a public platform in London and slammed proposals for Western military intervention in Libya. In my mind, the hasty scramble to get involved by the Americans, French and British lacked strategy and a clear goal; it appeared to be yet another oil-fuelled, reckless act by gung-ho leaders. The possibility looked very real that they would end up being sucked into a long military campaign as futile as the Bush-Blair adventures in Iraq and Afghanistan, for which we are still paying in wasted lives.

“Here we go again,” I thought. “Another imperialist adventure so that we in the West could get our grubby paws on someone else’s oil.”

I warned those few Libyans present at my talk that they would live to regret this pact with the West; I likened it to selling one’s soul to the Devil. Moreover, being very conscious of the fact that I’m not a Libyan, and desperate not to be seen as another opinionated Westerner sticking my nose into matters I don’t understand, I sought the views of many Libyan friends and contacts.

Their reaction was mixed, but more often than not I was told that without outside help the Libyan people would be slaughtered by Gaddafi. After all, he actually described his opponents as cockroaches which needed to be crushed.

To justify my stand I reasoned that all revolutions are bloody and that the heroic people of Tunisia and Egypt had paid the blood price in their hundreds to win freedom. I even recalled what Malcolm X had told people: if they are not prepared to die for it, they should remove the word freedom from their vocabulary.

Of course making grand statements from platforms in central London is one thing but going to see for myself what was happening in Libya was something else. My few days there proved to be extremely humbling and illuminating; a strong reality check, indeed.

So let me be absolutely clear: I was wrong to oppose military intervention. No ifs, buts or maybes; I was wrong, wrong, wrong. The people of Libya would have been crushed brutally and without mercy, if the West had not responded to their cries for help.

In order to illustrate the magniture of this, erm, well not-quite-Damascene epiphany, let us delve into the archives and recall Yvonne’s jaunt to Libya in 2009, as part of the Viva Palestina Aid-To-Hamas convoy. As is clear from the following description, from Viva Palestina, the convoy were not only the guests of the Libyan Government, but of the Gaddafi family itself: if that is not a tautology.

George, who is with the convoy, said to Libya Elyoum newspaper, that it is thanks to the Gaddafi Foundation and its head Seyf El-Islam Gaddafi, that this convoy is enjoying a smooth crossing of Libya, and that he was keen to establish a partnership with this foundation to guarantee the success of the convoy.

***
The convoy is in Misurata. The hospitality of the Libyan people, government and the Gaddafi Foundation has left the convoy members in tears.

After the the public rally in Tripoli today (pictures here), they set off with an additional 60 Libyan vehicles loaded with humanitarean aid and medecine towards the coastal town of Misrata. They were met with jubilant ordinary Libyans who hold Palestine and Gaza close to their hearts.

The organisers and the Gaddafi Foundation are ensuring the smooth and safe passage of the convoy through Libya by providing everything the convoy needs – from free fuel to accomodation and repairs, etc.

***
They are in their thousands in the Green Public square of Tripoli attending a big rally to welcome the Viva Palestina humanitarian Gaza convoy. This is the first of many planned in Libya.

Ambassadors, dignitaries, representatives from the Gadaffi Foundation as well as the children of Palestine have spoken of the horrors and the tragedy of Gaza.

Gift bags containing caps, T-Shirts, books have been given to members of the convoy as a gesture of thanks and admiration for their efforts to get the aid to the destitute people of Gaza.

Up to 100 Libyan trucks are joining the convoy starting with the Tripoli contingent today including ambulances and a fire engine. The Gaddafi International Charity and Development Foundation (GICDF) is sending a considerable quantity of medical aid.

***
Leading the welcome preparations of the convoy is the Gaddafi International Charity and Development Foundation (GICDF) which said it is to join the Viva Palestina with its own convoy of medical aid.

GICDF has for over a week been contacting Libyan public and private institutions to contribute to the aid convoy and to take part in the welcoming of the members of this humanitarian mission.

***
According to the Libyan press, the Libyan Government has prepared a program full of activities for the convoy throughout its journey across the country lasting 5 days.

The Tripoli Post gives further details of what they claim is a very close relationship between the Foundation and Galloway:

Leading the welcome preparations of the convoy is the Gaddafi International Charity and Development Foundation (GICDF)which said it is to join the Gaza Aid Convey with its own convey of medical aid.

GICDF has for over a week been contacting Libyan public and private institutions to contribute to the aid convey and to take part in the welcoming of the people coming from Britain.

According to GICDF, the pro-Palestinians British PM George Galloway, the force behind the aid initiative, has been in contact with the foundation and coordinating with it.

GICDF said Mr. Galloway praises the Libyan people’s help and support he received in 1999 when he launched “Miriam Call” in the support of the Iraqi people.

GICDF has taken all necessary measures to make the Gaza Aid Convoy’s traveling through Libyan cities and territories as smooth as it can possibly be.

A statement released by GICDF said that its officials are in continuous contact with the organizers of the Gaza Aid Convey all the time.

And Yvonne was there too of course. Oddly, the entry recording her happy time in Libya has disappeared from her personal website, but here it is in the Google cache: 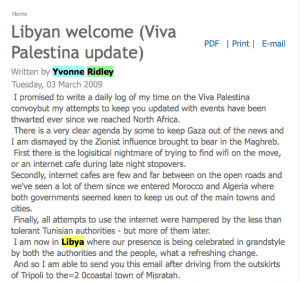 Her hosts, the Gaddafi Foundation, read and responded:

So, what could possibly have turned Yvonne Ridley around on this important issue? How can she now be saying things like this?

In the meantime, the West must give the people of Libya all the help and support they need to remove Gaddafi until it is time for NATO to make a dignified exit. Who knows, for once, Western intervention might possibly turn out to be a force for good.

Who were the “many Libyan friends and contacts” whose view persuaded her into neoconnery?

Might it possibly have something to do with this?

The Muslim Association of Britain (MAB) is in agreement with the enforcement of the no-fly in Libya, by Britain and its allies in order to protect Libyan civilians from being murdered by its cruel dictator Qaddafi.

MAB salutes the British armed forces for their role in helping the Libyan people.

Which itself is explained by this:

Al-Amin Bilhaj, a leading figure in the Libyan Muslim Brotherhood and the President of the Muslim Association of Britain (MAB) recently traveled to Benghazi, the headquarters of the rebel movement, according to Hresha.