Lord Bell is a Conservative Peer who was previously the top PR adviser to Margaret Thatcher and formerly a PR adviser to General Pinochet.

Bell is now working for Chime:

Tim Bell is one of the best known figures in the United Kingdom communications industry. He helped found Saatchi & Saatchi in 1970, and as International Chairman he took Saatchi & Saatchi into its position as the first British number one worldwide advertising agency in 1981. He successfully ran the publicity campaigns for the Conservative Party for the general elections in 1979, 1983 and 1987.

He was appointed deputy Chairman of Lowe Howard-Spink & Bell plc in 1985 and remained in that position until the formation of Chime Communications in 1989. He advises the chairmen of many of Britain’s leading companies and organisations, as well as foreign heads of state and international business leaders and politicians. He was awarded a knighthood in 1990 by Lady Thatcher in her resignation honours and a peerage by Tony Blair.

One of Bell’s companies is Bell Pottinger, a PR firm. A senior figure in Bell Pottinger has previously worked alongside libel specialists Carter-Ruck. The Guardian reported:

In the case of Trafigura, the Carter-Ruck partner Adam Tudor has been co-ordinating legal moves with Neil Cameron of Bell Pottinger, the firm of lobbyists founded by Tim Bell, once Margaret Thatcher’s favourite PR man. They have brought legal actions, complaints or threats against foreign media organisations […]

Bell Pottinger think that lying about your opponents is a necessary part of politics, and that it is a good thing that election campaigns should be accompanied by lies and smears.

However, most people would disagree. We need to know the truth, not the lies, about people who hold political power and responsibility.

Remember, back in February, Harry’s Place reported on a fawning article in Vogue, singing the praises of Bashar al-Assad’s wife, Asha, which called her a “rose in the desert“.

Vogue treated us to this fluffy image: 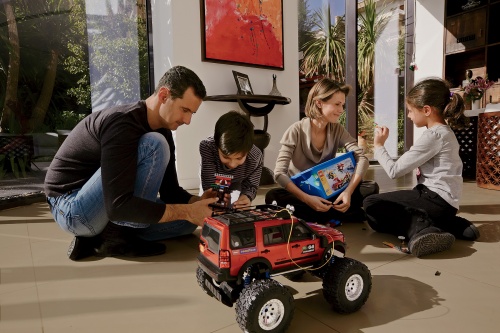 Asma al-Assad is glamorous, young, and very chic—the freshest and most magnetic of first ladies. Her style is not the couture-and-bling dazzle of Middle Eastern power but a deliberate lack of adornment. She’s a rare combination: a thin, long-limbed beauty with a trained analytic mind who dresses with cunning understatement. Paris Match calls her “the element of light in a country full of shadow zones.” She is the first lady of Syria.

This image masked the terrible reality of Syria under al-Assad.

As many bloggers here suspected, this article was placed in Vogue by a PR company. This week, we discover which company was behind the article. Bell Pottinger. We read in the Guardian:

Meanwhile, Lord Bell, the chairman of Chime, the London public relations company that includes Bell Pottinger, told on Wednesday how he acted for Syria’s first lady, Asma al-Assad, in 2007 and 2008 at the beginning of a public relations drive to place her at the forefront of Syria’s international image, which culminated earlier this year in a sympathetic Vogue article that branded her “a rose in the desert”.

“She wanted to set up a first lady’s office rather like Laura Bush and Queen Rania of Jordan,” Bell said.

“At the time she didn’t want to appear in fashion magazines and she wanted to be taken seriously. She was interested in pitching for Damascus to become a city of culture and we set up an office and communications structure for her, did speech writing and set up interviews with serious media.”

Judging by Lord Bell’s words, it seems that Bell Pottinger had changed Asma’s mind, advising her that articles in fashion magazines would be the best “way-in” for her to market her image. Moreover, Bell makes it clear that Asma al-Assad’s intentions are political at heart. Asma aligns herself 100% with her husband’s brutal, murderous policies.

Knowing all this, it is disgraceful that Lord Bell’s organisation should deliberately try to present such an evil brand of politics in a more palatable way for Western consumption. We wouldn’t tolerate a political column written by Asma al-Assad, but if we can see into her living room, we can welcome her into our hearts.

That’s how the thinking goes. Some might call it cynical.

In today’s Observer, Peter Beaumont contrasts the image of Bashar al-Assad with the brutal reality of his murderous regime:

Syria’s new president seemed then, almost a decade ago, a plausible figure, uncertain and almost modest, an impression encouraged by the marketing of him in the west by the British PR agency Bell Pottinger. He had been president for two years, having in 2000 succeeded his authoritarian father Hafez al-Assad, the man who had founded Syria’s Ba’athist republic after seizing power during a coup d’etat in 1970. That early image is one that Assad and his wife have continued to promote assiduously, most recently in an interview given by Syria’s first lady to a gushing Vogue magazine, which included pictures of Assad playing with his sons.

It is an image that served the London-trained ophthalmologist well, securing him a state visit to London at a time when the government of Tony Blair – as well as other European governments – thought he was a different proposition to his father, who gained notoriety for ordering the deaths in 1982 of up to 20,000 in the town of Hama during a revolt by the Muslim Brotherhood.

But in the last few weeks that early image has seemed sharply at odds with the acts carried out in Assad’s name in a murderous clampdown on those demonstrating against the regime, which has so far claimed more than 400 lives as Syrian towns have been put under siege – an entire country locked down.

Lord Bell has been under pressure this week. We read in the Evening Standard that Lord Bell has accused Radio 4’s Today Programme of getting its facts wrong, after being criticised by the BBC for doing PR for other Arab dictatorships such as Bahrain and Tunisia.

PR Week reported back in February:

Following the killing of seven protesters in a police crackdown on the anti-regime campaign in Bahrain, a small group of protesters appeared outside Bell Pottinger’s High Holborn offices in London this morning to draw attention to the work the agency does for the country.

Today’s protesters, who held placards with slogans such as ‘You can’t spin the unspinnable’, caused the main doors of Bell Pottinger’s offices to be closed and employees had to enter by a rear entrance.

But Bell Pottinger chairman Lord Bell said that he felt under no pressure to resign the account following the seven killings.

Bell Pottinger has been retained by the Government of Bahrain for two years. In the past week, the agency has taken on extra responsibility and is handling media centre enquiries about the protests.

Clearly, people started picking up on this, and asking questions of Bell Pottinger.

This week, however, Bell Pottinger has been subdued on Bahrain, according to the Independent:

Bell Pottinger, the British public relations firm, represents the Bahrain government in various capacities: the firm sends out regular emails to journalists, including getting out the Manama administration’s line at the start of the opposition protests last month.

However, it was difficult to get the firm to talk about its future in the tiny Gulf state in light of yesterday’s death sentences. A call to its office in Manama was referred to the managing director in the country, Matthew Gunther-Bushell, who passed on inquiries to Lord Bell himself. Calls to his office and an email asking about the firm’s preparedness to carry on its work were not returned yesterday.

At the start of the protests last month, Bell Pottinger issued several emails to journalists, including one about the administration’s readiness to receive the injured in hospitals. The Independent subsequently reported that the regime was detaining doctors.

Who else has Bell Pottinger represented?

The Observer reported in 1999:

Bell Pottinger Consultants, said to have been paid £200,000 by the Pinochet Foundation, have set up a ‘Chile reconciliation’ Website.

The Guardian reported in 1999:

It is being co-ordinated by Fernando Barros, a 41-year-old Chilean professor of law who has known Pinochet since 1979 and who came to Britain with his wife and nine children on a research project last July.

Barros contracted Lord Tim Bell, a man close to Margaret Thatcher, who had already worked for Pinochet in 1988. His public relations firm Bell Pottinger advised Pinochet in the referendum which sought to keep him in power. Although his goal was not achieved, Pinochet maintained his relations with Lord Bell.

[Bell Pottinger] director, Sir Tim Bell, former PR guru of Margaret Thatcher, confirmed that he had received 320.000 dollars to cover the costs for the distribution of leaflets and videos to 50,000 opinion makers and leaders in Great Britain, Spain and Chile. “Our strategy has been to communicate with key people to counteract 23 years of Marxist propaganda,” he told the Financial Times newspaper yesterday. “We believe in reconciliation, not retribution.”

Since advising Pinochet on how to hold onto power, Bell Pottinger has worked with other regimes which are not exactly synonymous with ‘democracy’.

We read in the Spectator (May 2008) about Bell Pottinger’s work with the last despot of Europe, Alexandr Lukashenko. Here we see Lord Bell boasting about discussing a deal with Lukashenko:

With its labour camps, occasional purges and general cabbage aroma, Belarus has an image problem. Lukashenko, very sensibly, has approached Lord Bell to fix it. ‘They asked us to make a proposal, we made it, and we have not yet had a response,’ says the PR guru. If the pitch is accepted, Belarus will make a slightly incongruous addition to Lord Bell’s client list, which has included Margaret Thatcher, Boris Berezovsky and the late Aleksander Litvinenko. He says, ‘Lukashenko told me that he hasn’t paid attention to external relations for years, and that it’s about time he did. He wants to have foreign investment and he wants to have better relations with the West.’

[Lord Bell] has been invited to come up with a strategy to overhaul Belarus’s dreary and despotic image. According to Lukashenko’s website, the pair met last week at the president’s office in Minsk.

Lukashenko hopes to court the west to boost his state’s economy, Bell told the Moscow Times last week. “He would like his country to be better understood, and his successes to be better grasped,” he said. “Lukashenko doesn’t see why Belarus can’t be a friend to the west and a friend to Russia at the same time.”

It is interesting what Bell Pottinger said about Mugabe in PR Week:

Agency boss Peter Bingle said he turned down the chance to work for Robert Mugabe’s regime.

He told the MPs: ‘We will turn down clients. We had a call from Zimbabwe asking to advise Zimbabwe. We said thank you very much, but no. It would have been a fairly malign campaign if someone had run it.’

Bingle added that when the agency is approached by an overseas client ‘we would talk to the foreign office, take a view, look at whether we would want to work for that type of country or company’.

Is that really true, that Bell Pottinger consults the Foreign Office before taking on clients?

So, working for Syrian, Iranian, Chilean, Belorussian and Bahraini tyrants is okay, but working for Mugabe is beyond the pale?

How did they work that out?

In which direction is Bell Pottinger’s moral compass pointing?

This is all such a horrible state of affairs, but I hope that people continue to ask searching questions of PR firms, and the way brutal tyrants are presented to us in newspapers in magazines.

What can we say, about members of the British political establishment providing image makeovers for dictators?