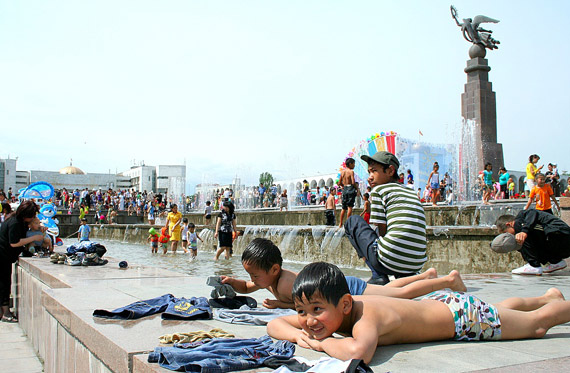 Kyrgyzstan remains for the Kyrgyz with proposals to rename Ala-Too Square (above) in Bishkek as Manas Square. Whereas Ala-Too refers blandly to nearby mountains, Manas refers to a mythical Kyrgyz epic.

Almost one year after the deadly riots in southern Kyrgyzstan which targeted mostly ethnic Uzbek civilians, the authorities continue to pursue those responsibly: by charging Uzbek activists

This latest trial, which is due to commence tomorrow in Jalal-abad, accuses a number of ethnic Uzbeks of charges varying from separatism to inciting ethnic violence and corruption. Many of those accused do not reside in the country, so the almost certain convictions will result in sentences handed-down in absentia.

In September 2010, another ethnic Uzbek, Azimzhan Askarov received a life sentence for a similar guilty verdict. Amnesty International had reported that he was compiling evidence of Police direction of the riots, many of which had been headed by well-organized militia members wearing balaclavas.

Through deliberate redrawing of national boundaries and/or transportation of established populations, Lenin and then Stalin had neutered much of the opposition to Russian rule in the region. Adjacent Tajikistan was left without any significant population centre whilst the formerly Tajik-dominated city of Tashkent became the capital of Uzbekistan.

Previously, cities such as Osh and Jalal-abad in the east of the Fergana Valley held significant populations of Uzbeks, but now went to the Soviet predecessor of Kyrgyzstan.

Yet, distinct notions of ethnicity had existed for centuries, based on subtle linguistic differences and myths of origin. Largely pastoral and semi-nomadic, the Kazakhs and Kyrgyz had been looked down upon by the primarily mercantile and/or agrarian Uzbeks and Tajiks.

And the sibling rivalry as seen between Cain and Abel persisted with the name-change to the Kyrgyz Republic soon after secession from the Soviet Union, with the implication that it was for ethnic Kyrgyz before other inhabitants (subsequently dual-citizenship was with-held from non-Kyrgyz).

The first President of the independent Kyrgyz Republic had been former physics professor, Askar Akayev. Although placing academics in charge of national affairs is generally a bad idea, Akayev was none too brutal or overly corrupt as autocrats go. Yet, after 15 years of increasingly imperious rule – albeit without the demonic nastiness of other Central Asian regiemes – he was toppled in the bloodless Tulip Revolution in 2005.

The opportunistic Kurmanbek Bakiyev – a former manual worker which is another example of poor work experience when it coming to running old Soviet Bloc states – took over, despite his removal as Prime Minister in 2002 following the fatal shooting of protestors in the southern city of Aksy.

Two months before the ethnic violence started in the south, street-protests began in Talas in the extreme north-west. As well being motivated against even greater corruption from Bakiyev, these protestors would also have been reacting against domination by Bakiyev’s clan and associations from around Osh.

As well as leaked findings from the Kyrgyzstan Inquiry Commission, its current focus on ethnic Uzbek is contradicted by open extradiction requests for Bakiyev Fils, Maxim who is seeking asylum in Britain. Eurasia Net discusses fairly open Jew-baiting by a Kyrgyz newspaper which accuses him of being “a Jew”, as well as Kyrgyz MP, Jyldyz Joldosheva taking Borat’s cue, and blaming the Uzbeks.

I wonder if she also blames them for the lack of vowels in her forename.