After pledging reforms and ending the state of emergency, Bashar went back to doing what the Assads do best– killing Syrians. So he ordered an intensification of crackdown on people who are demanding the freedoms you and I take for granted.

The reported death toll stands at 350, but the actual figure could be much higher.

“The dead, the wounded and the campaign of arrests extended to a number of different Syrian towns while Daraa remains the focal point of it all. An eyewitness reported to Al Arabiya that the Syrian security forces raided Daraa at 5 a.m. and did so from four axes, the western auto-strad, the station, the customhouse, and the camp.

“More than 3,000 members of the security forces supported by armoured vehicles and tanks were deployed to the town, and snipers took up positions on the roofs of the government buildings. Sounds of explosions and random gunfire were heard, and an eyewitness indicated that a number of people were killed. However it was impossible to move them to any hospitals as the security forces were preventing ambulances from entering the town, which had its electricity supplies and phone lines cut.

“There were also uncorroborated reports from eyewitnesses that there were exchanges of gunfire between the regular army and a special forces unit after the regular army refused an order to open fire on the demonstrators.

“In the suburb of Doma, on the outskirts of Damascus, human rights activists reported that gunmen and the Syrian security forces had opened fire at random on civilians. The security forces also carried out a campaign of arrests and eyewitnesses reported that the telephone communications to the area were completely cut off.

“In the US administration’s first steps against the Syrian authorities’ actions towards the demonstrators, the Wall Street Journal reports that the government of President Barack Obama is preparing to issue a decree to freeze the bank accounts of Syrian officials and to prohibit them from setting up any business or trade relationship with the USA.

“Britain, for its part, had previously advised its nationals residing in Syria to leave the country if they did not have any urgent need to remain there. It did this because of what it considers to be Syria’s rapidly deteriorating security situation.

“Amid this, 100 Syrian writers and intellectuals issued a statement calling for a comprehensive national dialogue which incorporates all the different [religious and ethnic] sects of the Syrian people. It also condemned the bloody campaign of oppression against the demonstrators.

Cry of “The people want to overthrow the regime!”

“Human rights groups stated that since the beginning of the marches six weeks ago more than 350 civilians had been killed by the Syrian security forces, and that a third of the victims were killed during the last three days.”

“Daraa in the south, it’s a town whose people are people of patriotism and noble and authentic pan-Arabism, as the Syrian president described it himself. And it is also a town being targeted by his armed forces and his army’s tanks in what human rights activists described as a barbaric war to annihilate those who are demanding freedom and democracy.

“Five weeks ago their voices were emitted from here and made their way throughout all of Syria. For the time being their voices have disappeared behind the whizzing of bullets accompanied by the raid on the town taking place from four axes, according to eyewitnesses, along with the electricity and phone lines being cut.

“Snipers took position on government buildings and people were killed and injured when [the armed forces] opened fire at random.

“Accounts spoke of early-morning house-to-house searches [being carried out by the security forces], and of a fear of the security forces snatching corpses [to remove evidence of the killings] and finishing off the wounded. This pushed the people of Daraa to head to the nearby town Borsa Sham’s hospital for protection.

“The fear spread from Daraa to Nawa in the north and the nearby town of Azra, and there were cries from the region asking for international protection. Human rights organizations indicated that since the outbreak of protests in Syria, a month and a half ago, more than 350 people have been killed.

Man appealing to camera: “Please! Please! We implore the UN! We plead to all those with [unclear] . People of honour! We’re being killed!”

“Just as in Daraa in the south the situation was identical in the coastal mountains, the suburb of Douma, and Mouadmaia near Damascus– heavy deployment of security forces and the “shabeeha” to the streets. Along with gunfire, the deaths, the injuries and the arrests of dozens of political activists.

“The developments have pushed the UN Human Rights Committee to call on the UN Security Council to investigate the mass killings in Syria, which were also met with condemnation by more than 100 Syrian writers and journalists– from all sects, and from within Syria and from exile. In a statement they called on all Syrian intellectuals to break the chains of fear and also called for a comprehensive national dialogue which includes all of Syria’s ethnic and religious groups and achieves the demand of peaceful change.”

In this clip the army opens fire on civilians in Daraa. They seek cover. But when the gunfire stops they return to the street shouting that they’re not scared:

Most of the Syrians I knew when I lived there in 2006 were frightened and angry. Now they’re no longer frightened.

The question is, how many more of them are these two prepared to kill? 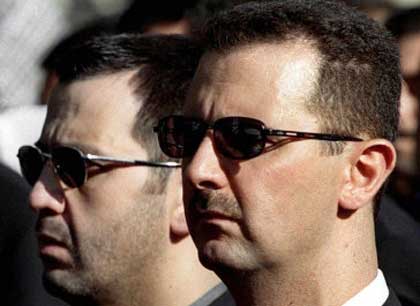 Meanwhile in Geneva, Syria’s bid to join the Human Rights Council is encountering some opposition.

Syria is a frontrunner for a seat on the Geneva-based Human Rights Council as one of four candidates selected to fill four Asian seats, and it is likely to win unless another candidate enters the race or it fails to win a majority of votes in the May 20 secret ballot election in the 192-member General Assembly.

Since the 53-member Asian Group endorsed its slate — which also includes India, Indonesia and the Philippines — for the council in January, rights groups and some governments have engaged in a behind-the-scenes effort to keep Syria off the council.

Those efforts have gathered steam since a crackdown on pro-democracy protests since mid-March has left more than 350 dead and hundreds wounded, diplomats said.
…..
Following the Asian Group endorsement, Syria issued a statement “pledging to uphold the highest standards in promotion and protection of human rights … and fundamental freedoms.”

“Syria considers that the protection of human dignity and fundamental rights are the basis of freedom, justice and peace,” the statement said.